END_OF_DOCUMENT_TOKEN_TO_BE_REPLACED

Just wanted to let you know that these easy, pie-inspired pinwheels are sponsored by my friends over at Flatout!

These healthy pumpkin pie pinwheels are only 6 ingredients, under 200 calories a serving and are ready in 20 minutes! They’re an easy, vegan-friendly snack or party food for fall! 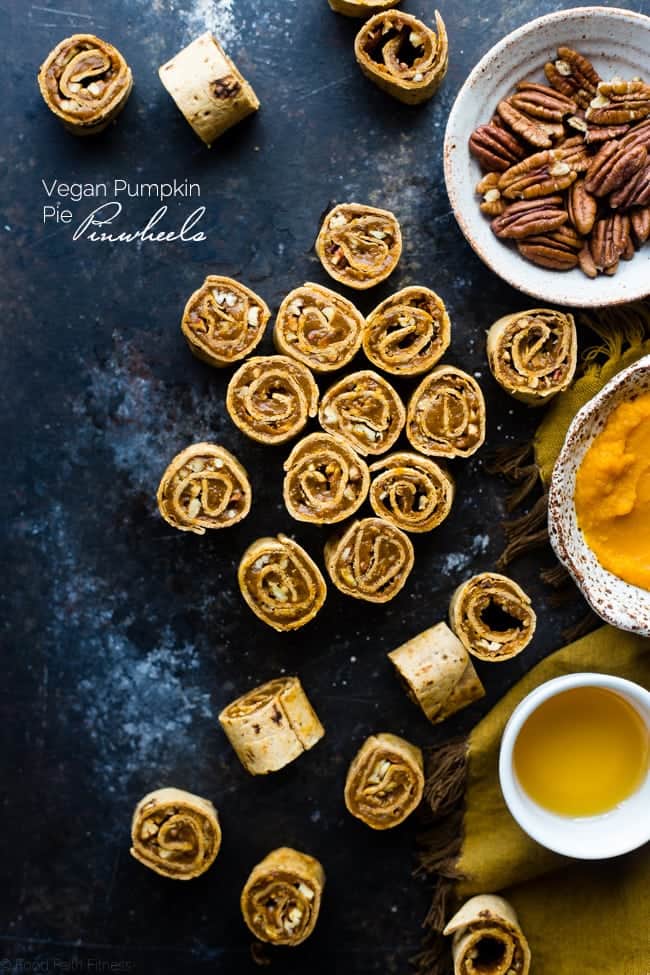 Just when you think you have all the pumpkin recipes you need.

I bring you one that is SO simple.

And SO, ridiculously ADDICTING. 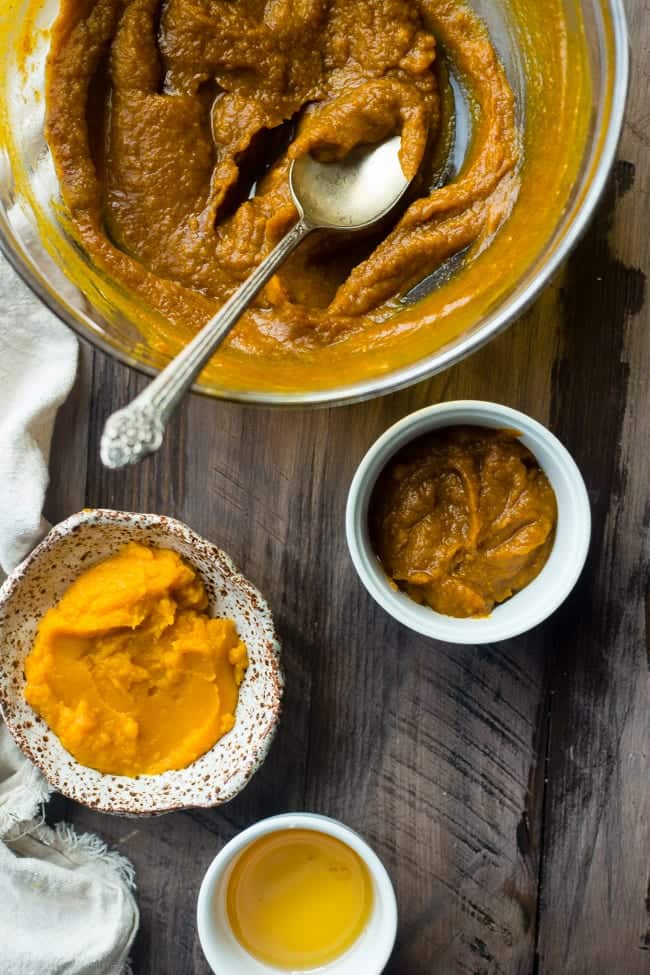 There is a zero percent chance that you’re even surprised by the fact that, why yes, Taylor DID follow suit of the pumpkin paleo cookies, pumpkin oatmeal breakfast bars and pumpkin gluten free grilled cheese hummus sandwich, and post another pumpkin recipe.

But, you guys. 6 INGREDIENTS. CRUNCHY pecans. Tastes like pumpkin pie. But, liiiiike, no refined sugar or dairy as far as your eyeballs can see.

I knew you wouldn’t be mad.

Not to mention the sneaky boost of protein from Flatout’s ProteinUP Carbdown wraps! You thought that Flatout wraps were only for making A-C-T-U-A-L wraps like the zucchini noodles blueberry basil wrap or honey garlic roasted chickpeas wraps. Today, we’re thinking “outside the wrap.” ProteinUp stealthily swoops in, and hugs the creamy-spicy-sweet filling in the epitome of healthy, “crust” like deliciousness. 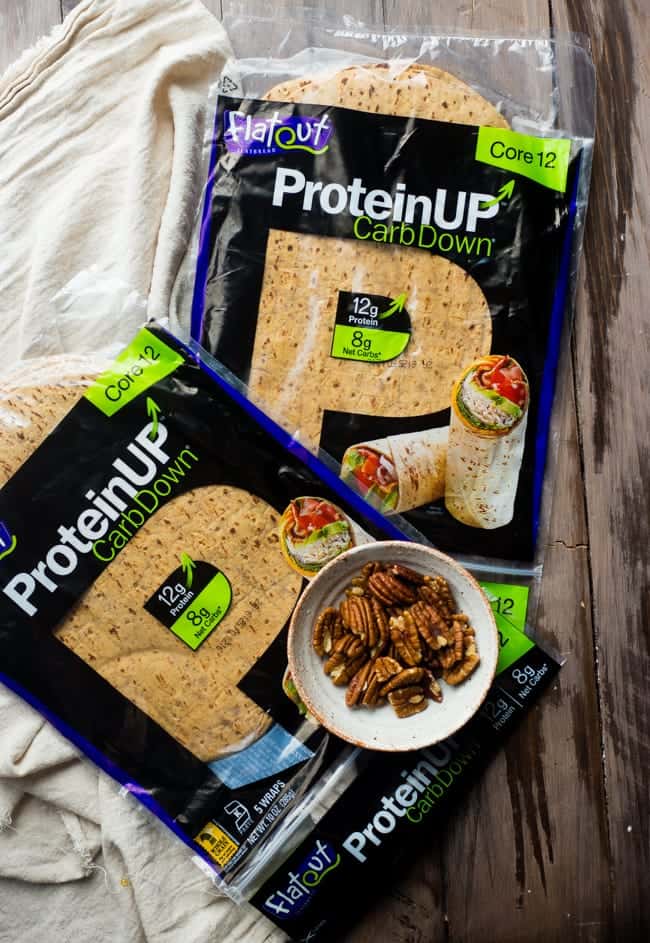 See also: “crust-like.” As in “you don’t have to spend 42 hours angrily trying to roll a perfectly circular low carb paleo almond flour pie crust recipe so that everyone will think you are basically a Martha Stewart when it comes to impressive, fancy dessert-making.

I said it in the paleo pecan pie bars, and I’ll say it again. Circles are hard.

Sweet like agave swirled around with smooth pumpkin puree and hit with a heavy dose of warm cinnamon and pumpkin pie spice, and then microwaved until SUPER thick, ultra-creamy and so spreadable that you might just want to spread it on everything EVERRRRR, 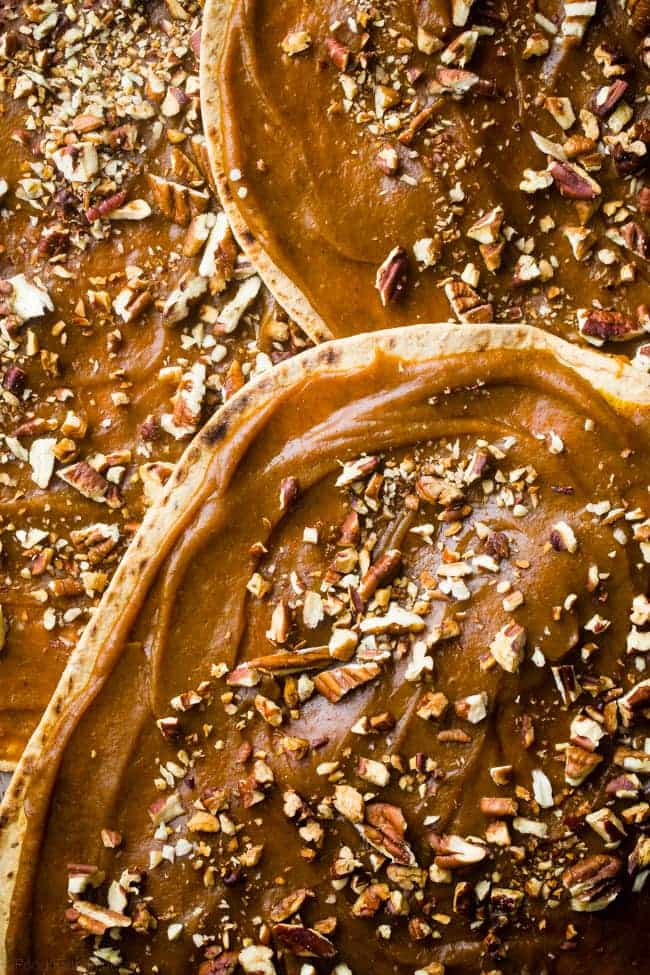 Which I am going to highly suggest. Toast? Spread it. (Unless it’s avocado toast. Too much.) On a caramel stuffed paleo banana bread muffin? Definitely do the spread. Your face?

But, HOOOOLD up for, liiike, 2 seconds. MICROWAVE spread-able pumpkin-pie-like filling is happening. We’re talking about the fact that only a measly 5 minutes stands between you and an EPIC pumpkin pinwheel moment happening in your very real, right-now kinda life.

You know I <3 the microwave for super-fast cooking. Heck, we’ve made microwave peanut protein pancakes, microwave spiralized gluten free apple crisp and even cookies for our cookies and cream paleo protein bars. 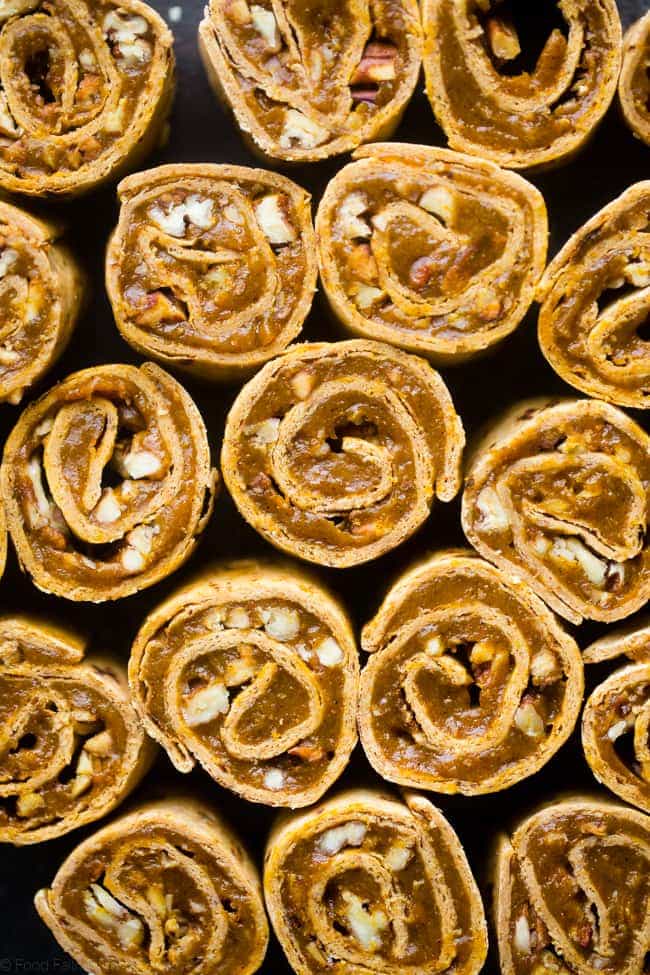 It’s like the oven. TIMES A MILLION. And it makes the hate-waiting-for-food-to-cook person that I am really excited. Mostly because it means that there is less minutes between food and my face.

You understand me on so many levels. I feel it in my soul.

I also feel sad. Sad that this is the first pinwheel recipe ever. Not ever as in “ever on the blog” (well, it is.) BUT, I’m talking about “ever” as in “ever that I have EVER put into my mouth.” 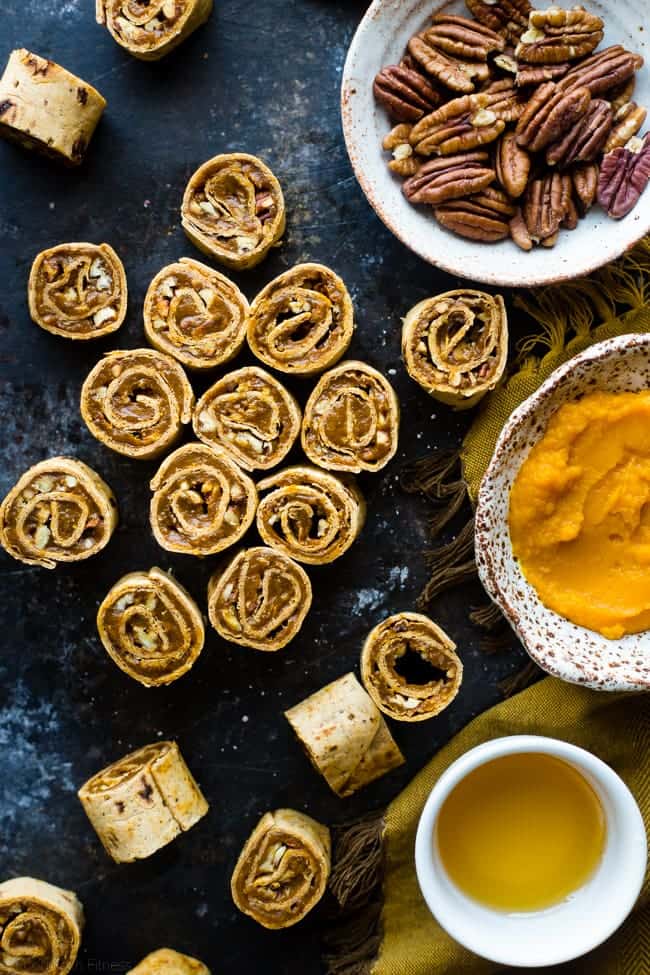 I guess my momma was too busy making me peanut butter and chocolate chip sandwiches (real thing that actually happened in my childhood lunchboxes) and never thought to make pretty, spiral-shaped wraps stuffed with yummy things like cheese and meat and a few veggies to pretend it’s healthy.

This also means that the “pinwheel” has been drastically left to my own interpretation.

And I interpret it to be much, MUCH better when these spiral-y layers are spread with luscious, rich pumpkin, spicy cinnamon and a toasty-roasty pecan CRUNCH that I just can’t get out of my head.

I’m thinking that it’ll happen to you too. 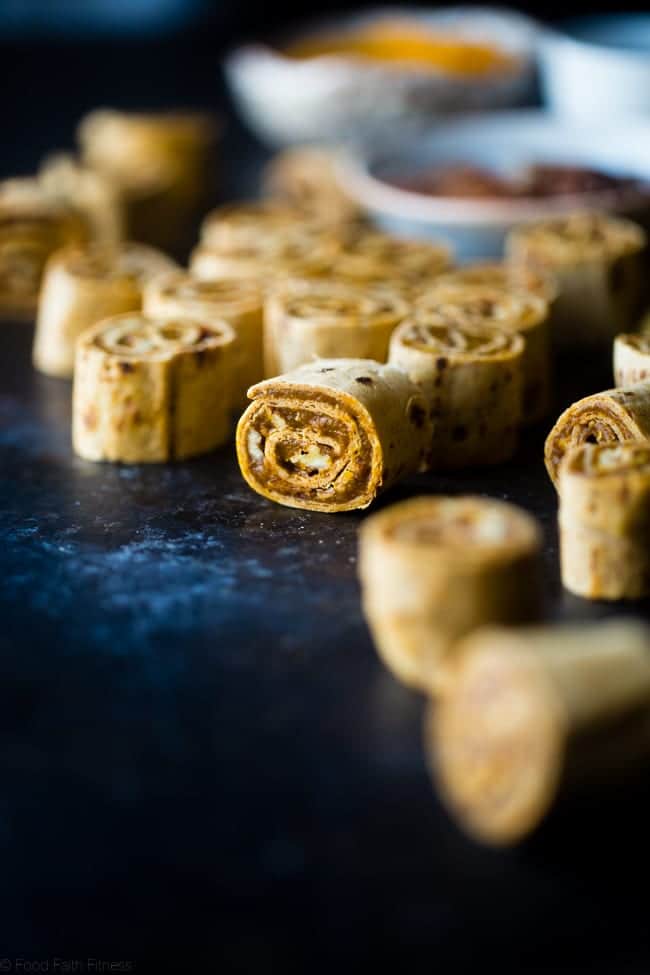 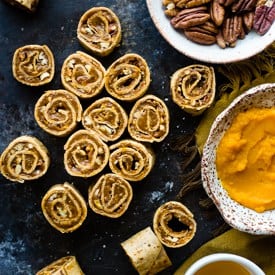 * If you want to bake these in the oven, use a small baking dish and bake for 40-45 minutes, until the mixture darkens and gets very thick.

Course:Appetizer, Snack
Cuisine:American
Share your creationsTag @foodfaithfit and hashtag it #foodfaithfitness so I can see what you made!
Rate It

THIS POST IS SPONSORED BY MY FRIENDS AT FLATOUT. THANK YOU FOR ALLOWING ME TO CONTINUE CREATING GREAT CONTENT FOR YOU BY SUPPORTING PARTNERSHIPS WITH SUPER-FAB BRANDS THAT FOOD FAITH FITNESS LOVES TO WORK WITH! AS ALWAYS, OPINIONS REMAIN 100% MY OWN!

Stay in touch with Flatout Flatbread on social media for other tasty recipes: 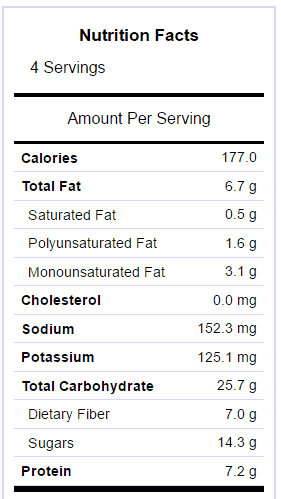 (per serving, which equals 4 pinwheels) 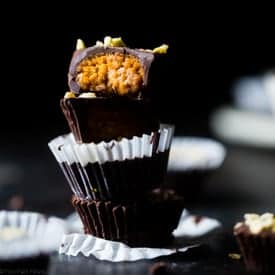 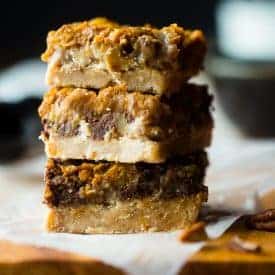 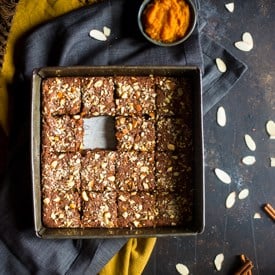 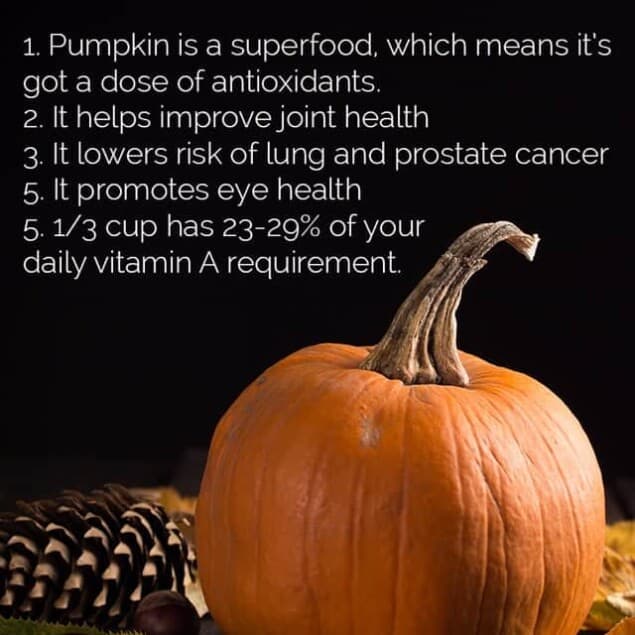 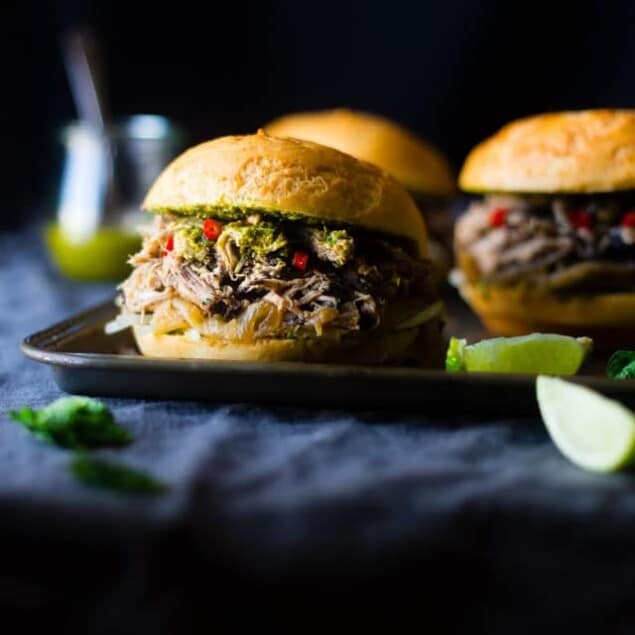