END_OF_DOCUMENT_TOKEN_TO_BE_REPLACED

Are you trying to healthy but miss delicious treats? Get 5 Secrets To Make Healthy Eating Easy (And Tasty!)

This Cauliflower Low Carb Paleo Vegan Stuffing is made entirely from vegetables but has all the flavor of traditional stuffing! Whole30, gluten free and SO delicious! 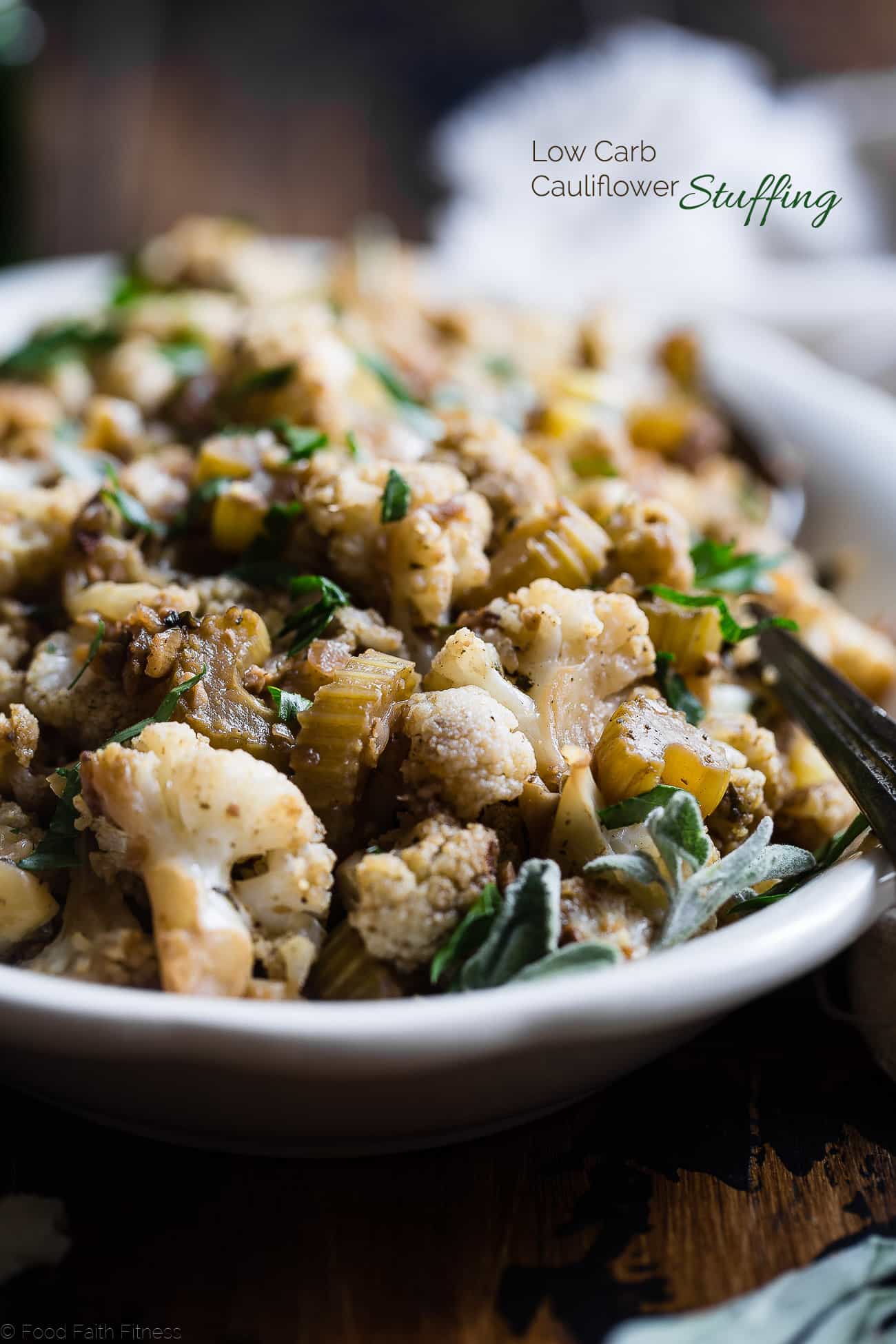 PALEO THANKSGIVING STUFFING MADE FROM VEGETABLES WITHOUT BREAD.

This Keto Low Carb Riced Cauliflower Stuffing is a real thing that exists in this universe and it RLY RLY needs to be happening on a Thanksgiving table near you in your VERY immediately real-person life.

A table so near that it is IN YOUR KITCHEN RIGHT NOW. Or it’s in the kitchen of wherever you are spending this glorious day of ALL THINGS DELICIOUS FOOD.

Every good memory of my family Thanksgivings revolve around my Grandma’s SUPER easy gluten free stuffing, scalloped sweet potatoes, and her paleo sweet potato casserole in the slow cooker.

Are you seeing the trend? ALL THE CARBS. 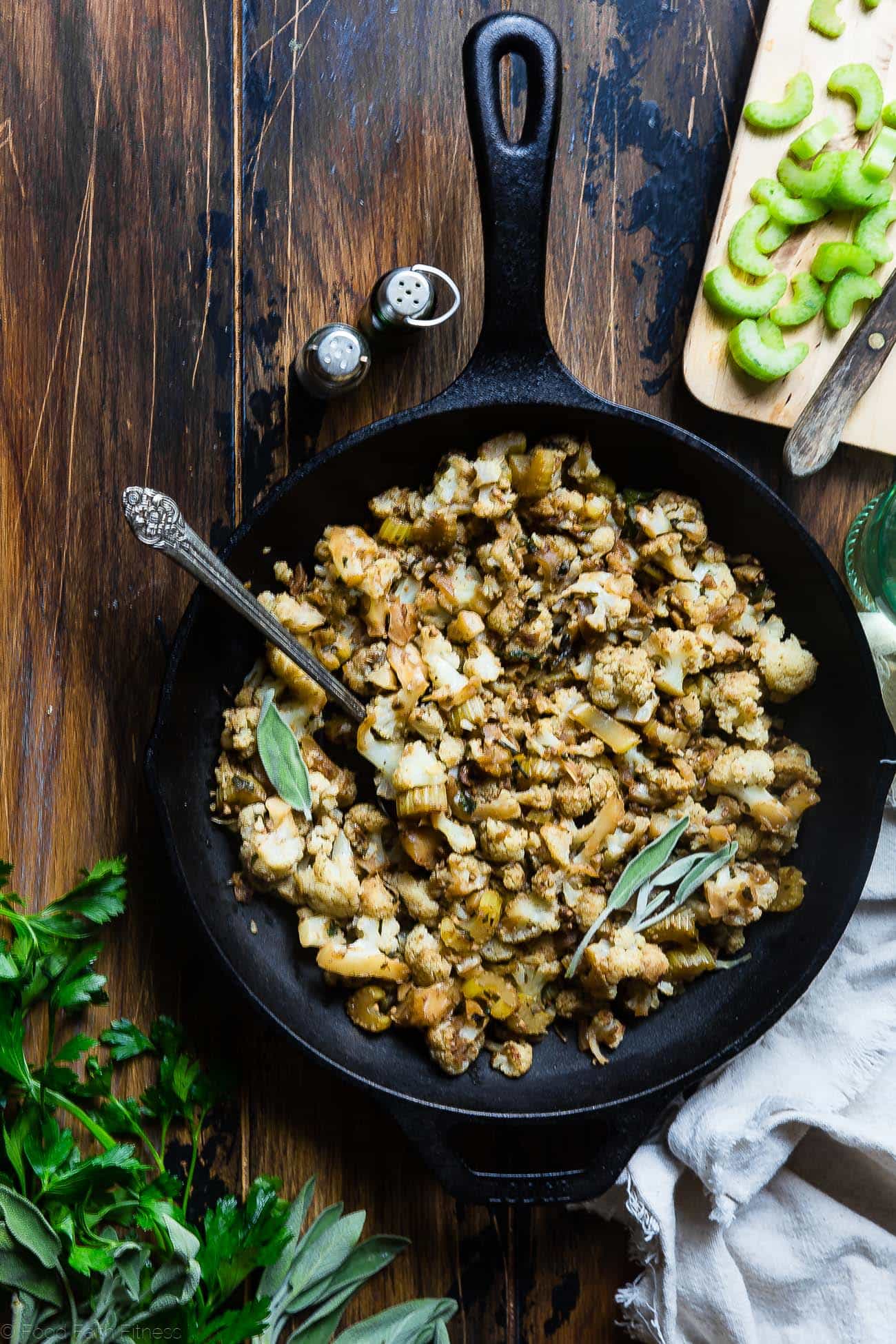 I mean, you know I love me some protein, so they’re turkey on my plate. Except you know those “portion plates” that have a tiny tablespoon slot for your “healthy fat?” THAT is where my protein would go at this meal. The rest is MORE CARBS FOR ME PLEASE.

As I age (says the 26-almost-27-year-old) I have been TRYING to reduce my carb intake a little bit. Real talk though: the keyword is “trying.” It usually ends with “AND FAILING.”

You can relate to this, I know.

Which is where the idea of this cauliflower low carb paleo vegan stuffing came from. We’ve talked about it eleventy billion times: cauliflower is our miracle veggie friend that can do all kinds of crazy and wondrous things that make us think we are eating unhealthy foods (mango chicken with coconut cauliflower rice, I’m looking at you!) but – PSYCH – VEGGIES YO.

Adding “can make you feel like you’re face-planting into cozy, herby stuffing-with-NO-bread” to the “special skills” section of cauli’s resume RN. 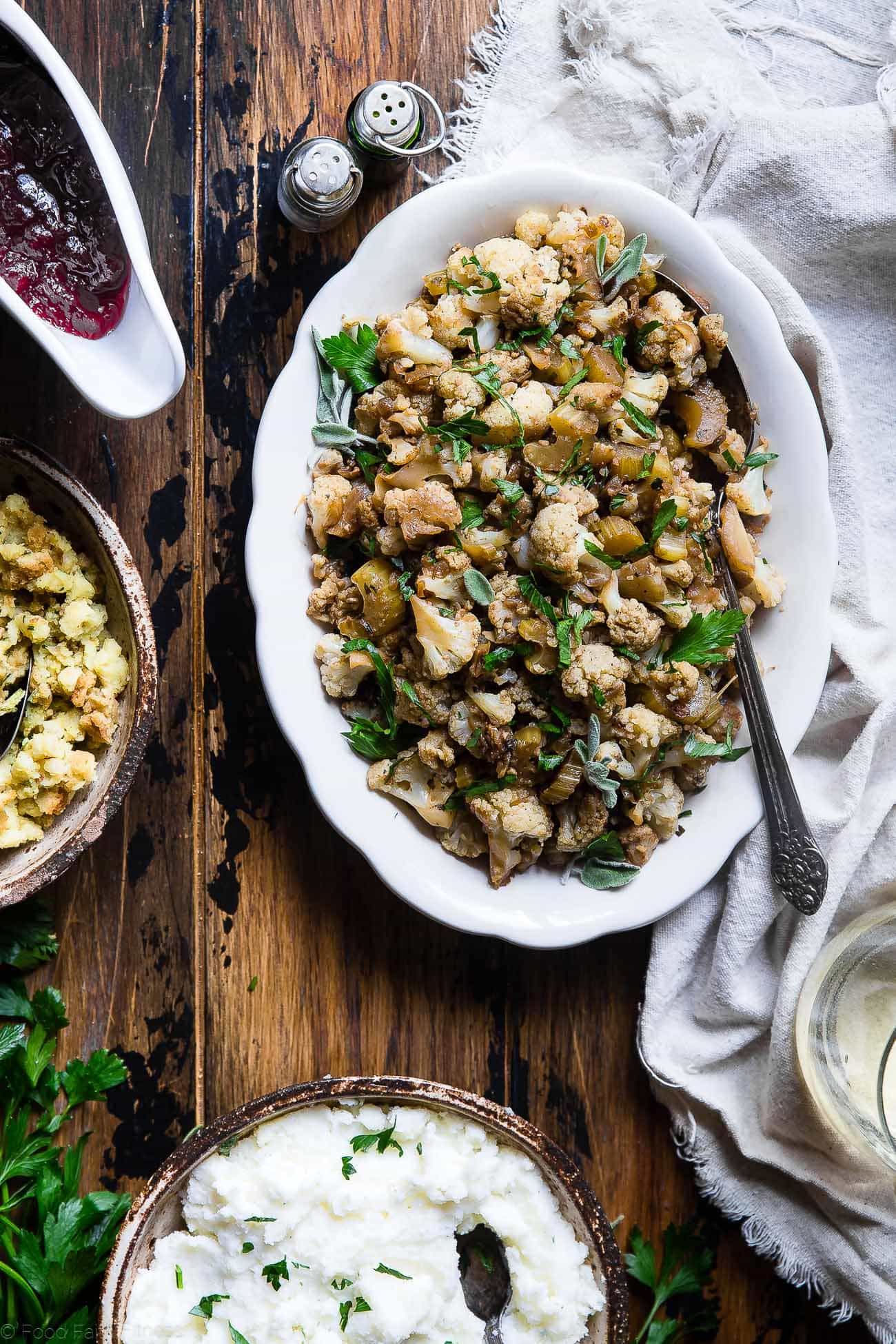 P.s I just learned that “RN” is “young person” talk for “RIGHT NOW.” If you were wondering.

Have to give a shot-out to Grandma for this recipe, ‘cause I PRETTY much took HER recipe – the spices/veggies/generally delicious things that she uses – and just chucked in a little vegetable action instead of bread. And then I also chucked the veggie version inside of vegan stuffed butternut squash and it was magic.

You know when you do something and just PRAY PRAY PRAY that it works? That is my life almost always with recipes, and most DEFINITELY in this low carb stuffing recipe situation.

I mean, cauli can do A LOT. But mimic pillowy-soft-perfectly-crispy bread? MMMMMMMM. UNSURE.

Internet besties. THIS IS THE REAL DEAL. The BEST vegan stuffing. Liiiike, it W-O-R-K-E-D. SOSOSO WELL. 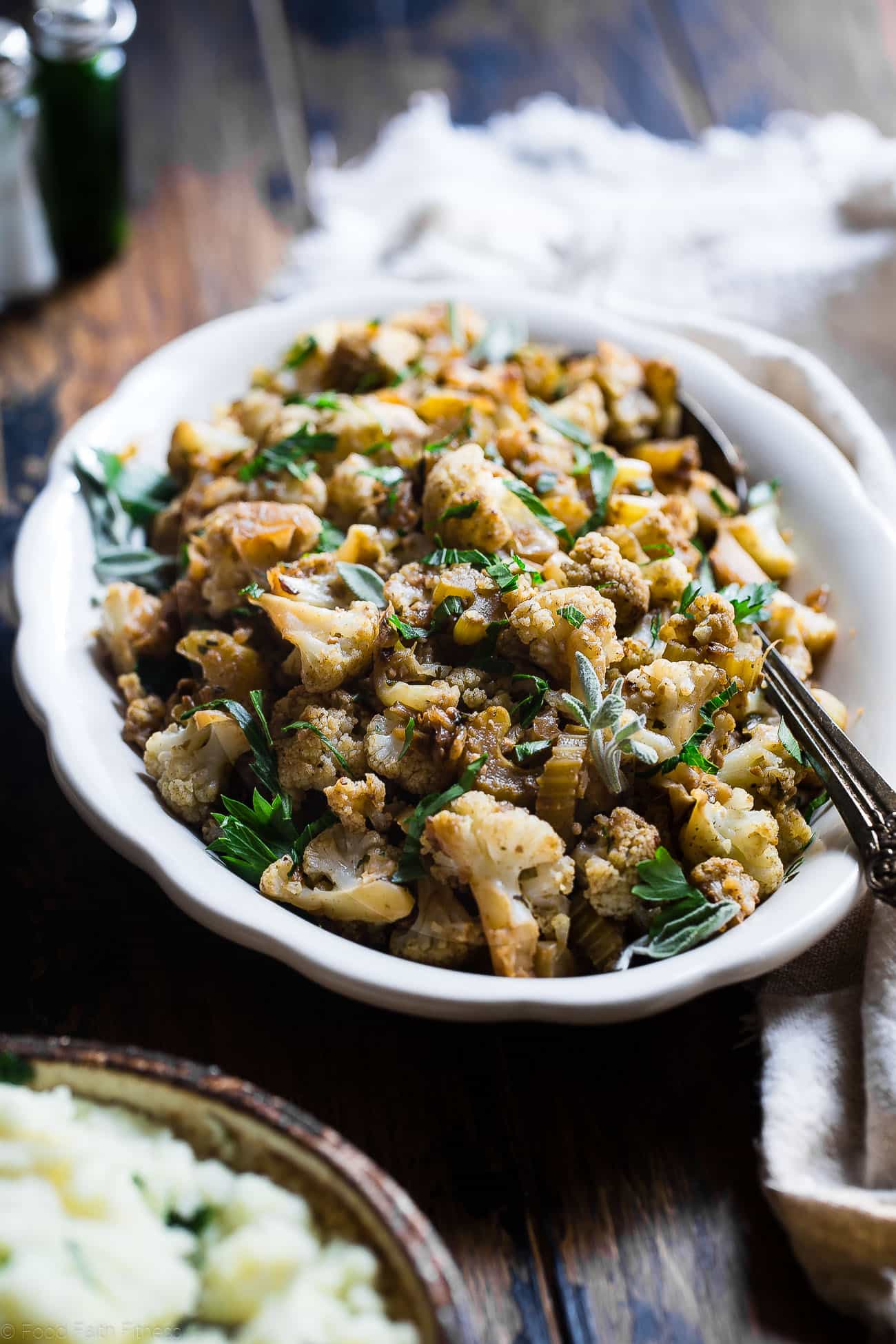 Crunchy carrots, zesty onions and crunchy celery mish-mash together with tender-crisp cauliflower and simmer in a pool of salty broth and herb-a-LICIOUS, earthy spices to create EVERY. SINGLE. Flavor profile that your mouth expects when you promise to fill it with STUFFING.

Except IX-NAY on the carbs. And HELLO VEGETABLES.

Cauliflower low carb paleo vegan stuffing is the kind of healthy little side dish that you almost don’t want to like, because it feels like SUCH a crime when Grandma has been slaving over her carb-inclusive recipe all day long. But, then you taste it, and SO LONG BREAD. THERES A NEW SIDE DISH IN TOWN.

And its name is vegetables forever and ever the end. Not even mad about it one bit. <–Pro tip, put some low carb sugar free keto cranberry sauce on top. You’re welcome.

P.s I made the (eats all the carbs ALL DAY LONG because METABOLISM LIKE WHOA) husband try a bite before telling him what I was “going for” and he was like WHY DO I FEEL LIKE I AM EATING STUFFING RN? <– #Trendy.

Make room for a little from-the-ground-goodness this Thanksgiving. 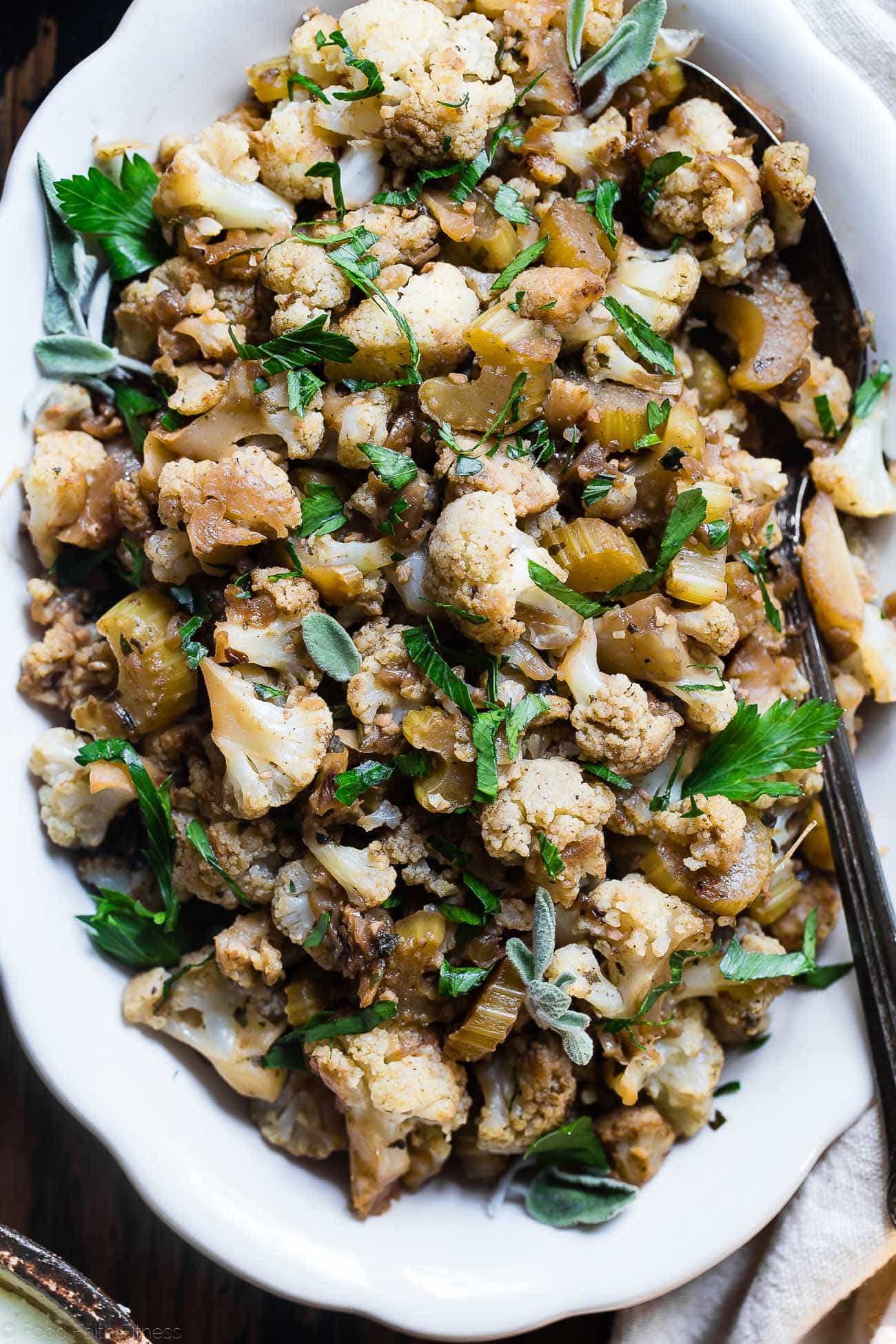 I also shared the Cauliflower rice stuffing recipe  on Food Fanatic, so be sure to check it out there! 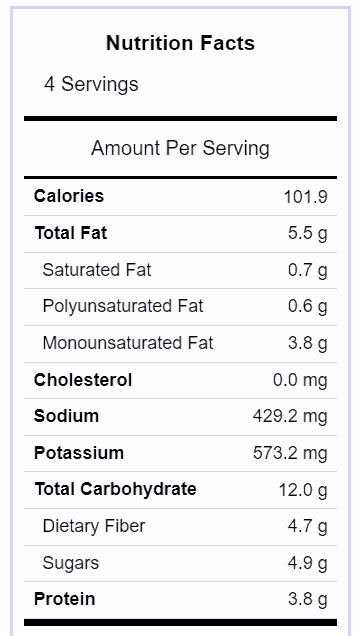 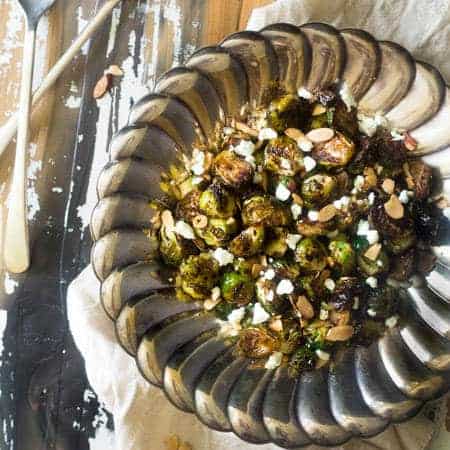 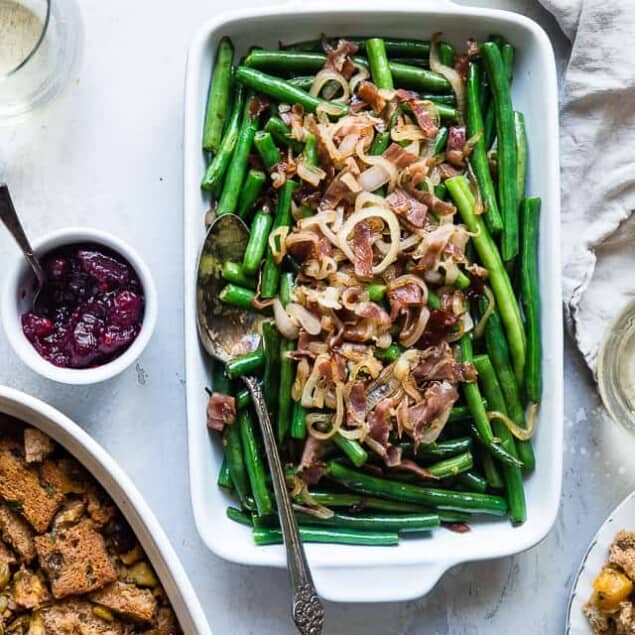