END_OF_DOCUMENT_TOKEN_TO_BE_REPLACED

By Taylor KiserDec 4, 2022Jump to Recipe 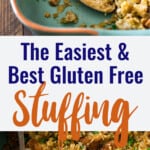 This gluten free stuffing is moist and so packed with flavor, you would never know how easy it is to make! Perfect for Thanksgiving or any holiday meal!

I’m not even gonna beat around the bush with some cutesy post intro today:

This is the BEST STUFFING you will ever eat in your ENTIRE LIFE.

It’s better than apple raisin easy gluten free stuffing and for sure better than cauliflower low carb paleo vegan stuffing because, well, CARBS. Every single person who has tried it agrees (read the reviews) and my taste buds look forward to it EVERY single year. It’s probably SO GOOD because it’s my Grandma’s recipe, which means it comes with LOADS of love….and deliciousness.

Why this is the BEST Thanksgiving Side Dish

When we’re talking about Thanksgiving, FOOD definitely comes to mind. Whatever I’m going to cook up for my family’s holiday dinner has to be delicious, comforting and there are a few MUST HAVES on my list to serve on my Thanksgiving table. First of all, you’ll need a big ol’ turkey, and we simply can’t forget some cauliflower mashed potatoes or my go-to cauliflower gratin recipe. BUT one of my favorite sides that is non-negotiable is stuffing- not just any kind of stuffing, but my grandma’s gluten free stuffing recipe! It’s the best of the best because it doesn’t cut carbs, is full of savory goodness, and the spices just finish it off into the most comforting and satisfying side dish! You are going to LOVE it!

Does regular stuffing have gluten in it?

A lot of stuffing recipes you see out there contain wheat. This means your typical stuffing is not gluten-free. But by substituting in gluten-free bread you can make your very own home-made stuffing that tastes even better than the ordinary ones.

Imagine a stuffing that doesn’t skimp on taste, but cuts out the gluten! Ok, stop imagining, because it’s REAL- this cozy, comforting stuffing is gluten free but that doesn’t affect the texture or flavor of it one bit! Here are the ingredients you’ll need to round up to make it:

As with most of the recipes here on the blog, I encourage some creativity if you’re missing an ingredient or two and don’t want to run out to the store, or another ingredient would suit you and your family better. For this gluten free turkey stuffing, here are a few suggestions:

To make it Vegan: If you need this recipe to be vegan friendly for yourself or someone in your crew, don’t sweat it! Simply switch out the chicken broth for vegetable broth and voila! A vegan friendly stuffing dish!

To make it Keto or Paleo: If you need the recipe to cater to those in your family who are eating a keto or paleo diet, simply use cauliflower instead of bread! Check out cauliflower low carb stuffing!

Ok guys, you know me- I’m ALWAYS on the hunt for little tips and tricks in the kitchen! A good recipe is made BETTER with a few simple tricks of the trade. Here are a couple for this stuffing recipe:

I like my table FULL of all the most delicious, flavorful dishes at Thanksgiving. Pair this stuffing with a golden brown turkey, some roasted pumpkin with maple syrup, healthy mashed sweet potatoes, and finish things off with a couple of gluten free sweet potato pie bars for dessert!

Make your gluten-free stuffing last longer by keeping it in an airtight container and storing it in the fridge. Make sure that it is at room temperature before storing. Then when it’s time to serve again, transfer the stuffing to a baking pan and cover it with tin foil. Reheat it in a 350 degree F oven for 30 to 40 minutes. Remove the tin foil for the last 10 minutes of cooking time.

Stuffing FAQ
Is stuffing that is gluten free still flavorful?

Absolutely, yes! This stuffing includes sage powder, poultry seasoning, pepper, as well as all the goodness of chicken in the broth, making it very flavorful. The only thing is doesn’t have is gluten!

YES! This stuffing works great on its own, or to use to stuff the bird!

Can you make stuffing in advance?

While I do recommend making and eating this stuffing the day you make it, it also can be reheated easily! Nothing’s better than a plate full of Thanksgiving leftovers!

What bread is the best for gluten free stuffing?

I usually use Udis gluten free – I find it’s hearty and holds up to the liquid. If you use a different brand you may need to adjust the broth a little! 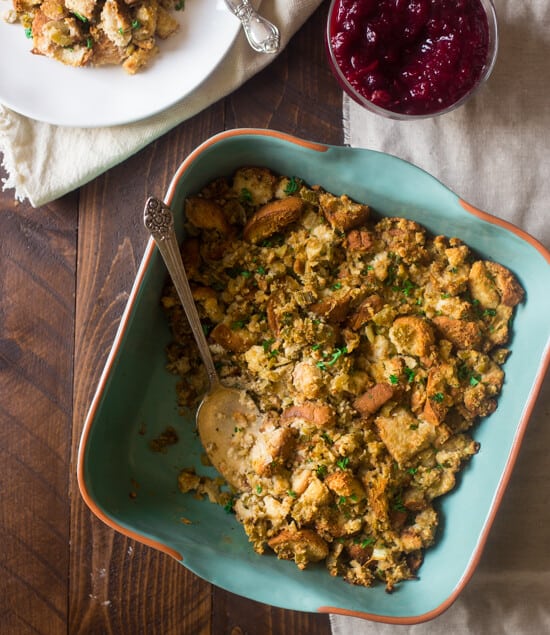 * I cut each slice into 9 pieces, so 2 slices across each bread slice each way
**I do typically prefer using reduced-sodium broth, but not here. Yes, it has a lot of sodium, but it gives it the FLAVAH. It’s Thanksgiving, live a little. 🙂 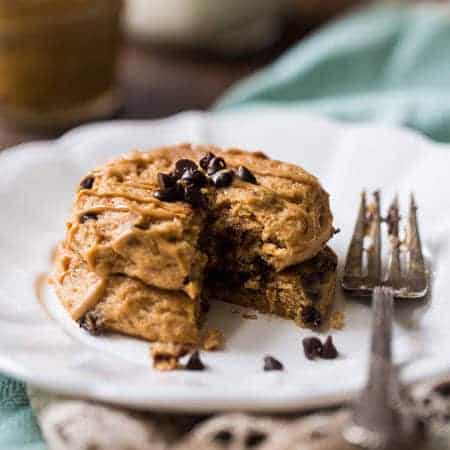 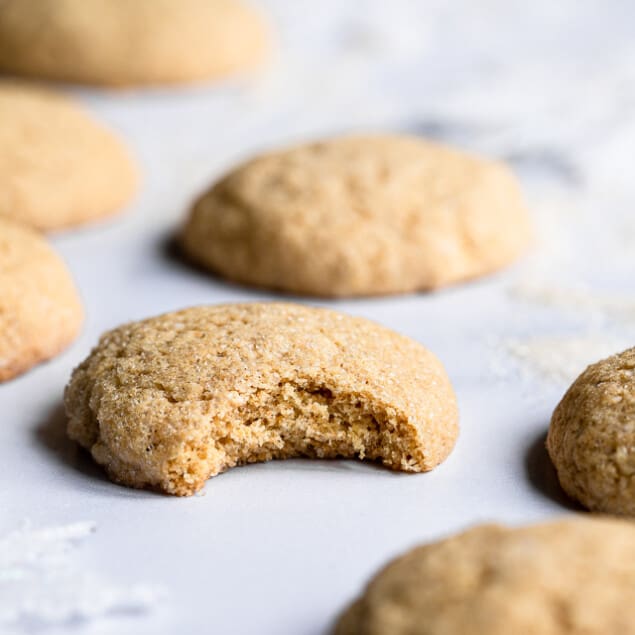