END_OF_DOCUMENT_TOKEN_TO_BE_REPLACED

By Taylor KiserOct 8, 2018Jump to Recipe 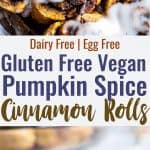 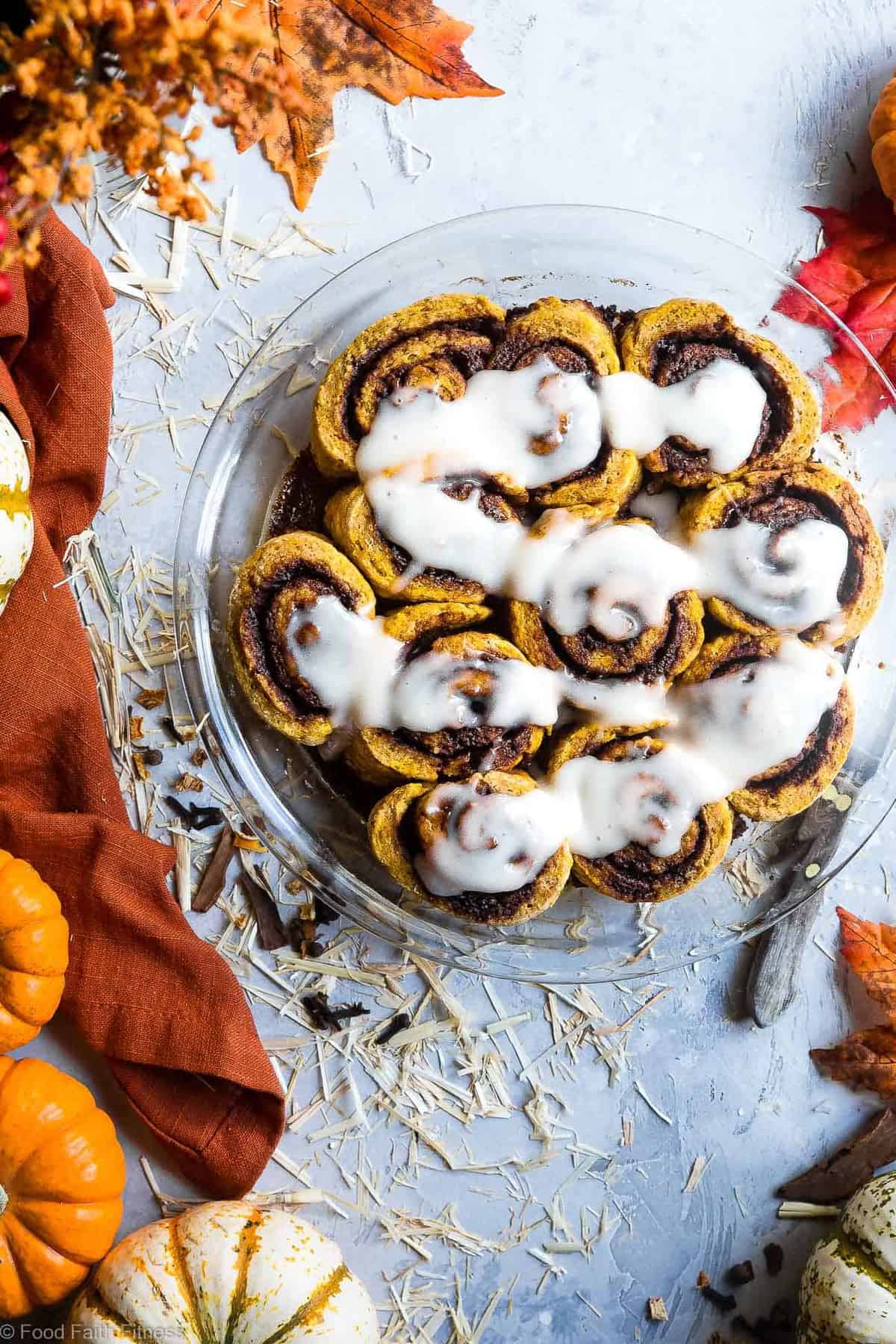 I honestly just wanted to name this pumpkin cinnamon rolls recipe THAT because it’s the FACTS.

There are things in life that you just know are going to be good, and the idea of PUMPKIN SPICE cinnamon rolls was one of those. Thought about it in my head and immediately cancelled ALL PLANS to make them happen.

Not that is any kind of feat since I A. work from home and B. have no friends beside my dog which leads to C. I never have any actual plans to cancel.

BUT, that is BESIDE the point.

These are SPICY. They are SWEET. AND they are L-O-A-D-E-D with fall-infused pumpkin spice DREAMS.

They’re the kind of food that you take a bite of and suddenly feel that Y-O-U can conquer anything that is thrown at you that day because if one TINY object can carry so much POWERFUL deliciousness, how much POWER can Y-O-U, a much larger object, carry. 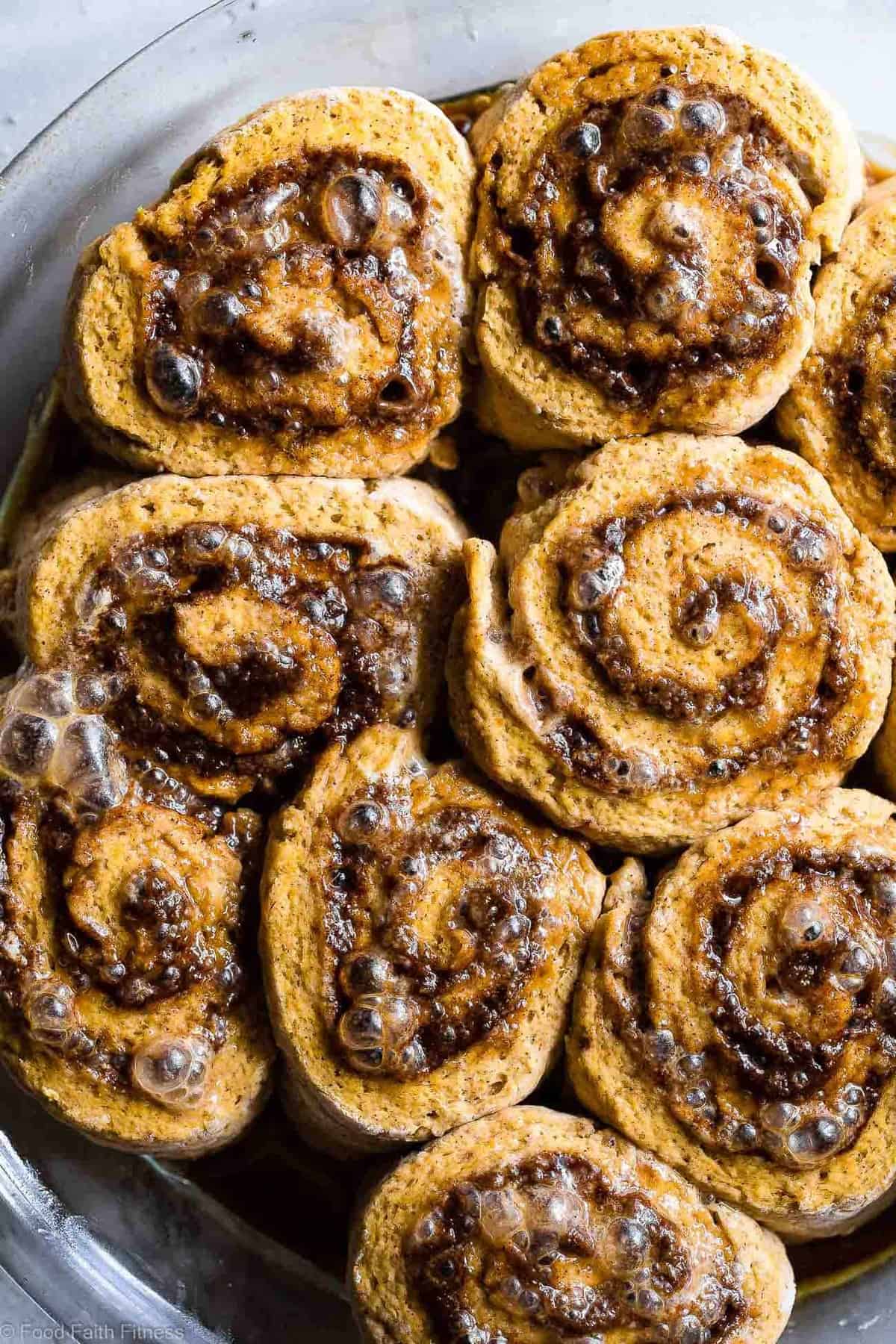 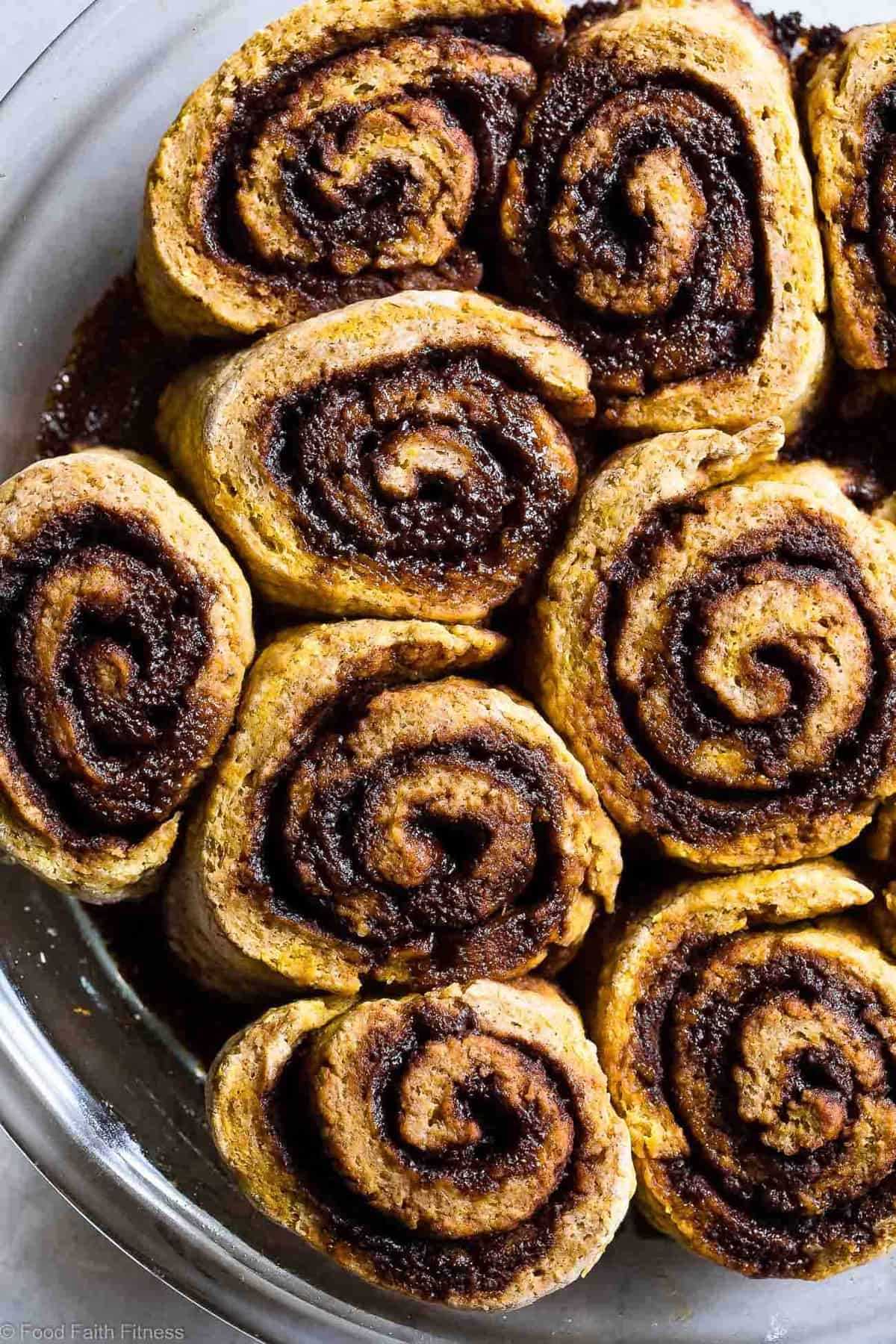 Side note: that might be an exaggeration. But is it really?

Side note, the sequel: you are a beautiful and wonderful person. You are NOT an object. Just wanted to clarify.

Truth be told, I really just had a hankering (do people still say this word?) for either dairy free gluten free cinnamon rolls or paleo cinnamon rolls one day, which was coupled with a desire for low carb keto pumpkin cheesecake because THIS IS OCTOBER.

Fall-food cravings just comin’ at us LEFT, RIGHT and CENTER.

Naturally, my recipe-developing brain went into HIGH SPEED and the pumpkin-cinnamon love child that is gluten free vegan pumpkin cinnamon rolls were BORN.

Can I confess something to you? As soon as I pulled these out of the oven and DOUSED (no drizzling here friends. COMMIT) them in the vegan cream cheese frosting, I IMMEDIATELY unrolled them entirely (and they unroll PERFECTLY. I feel like that’s important to note) and ATE THE MIDDLE. 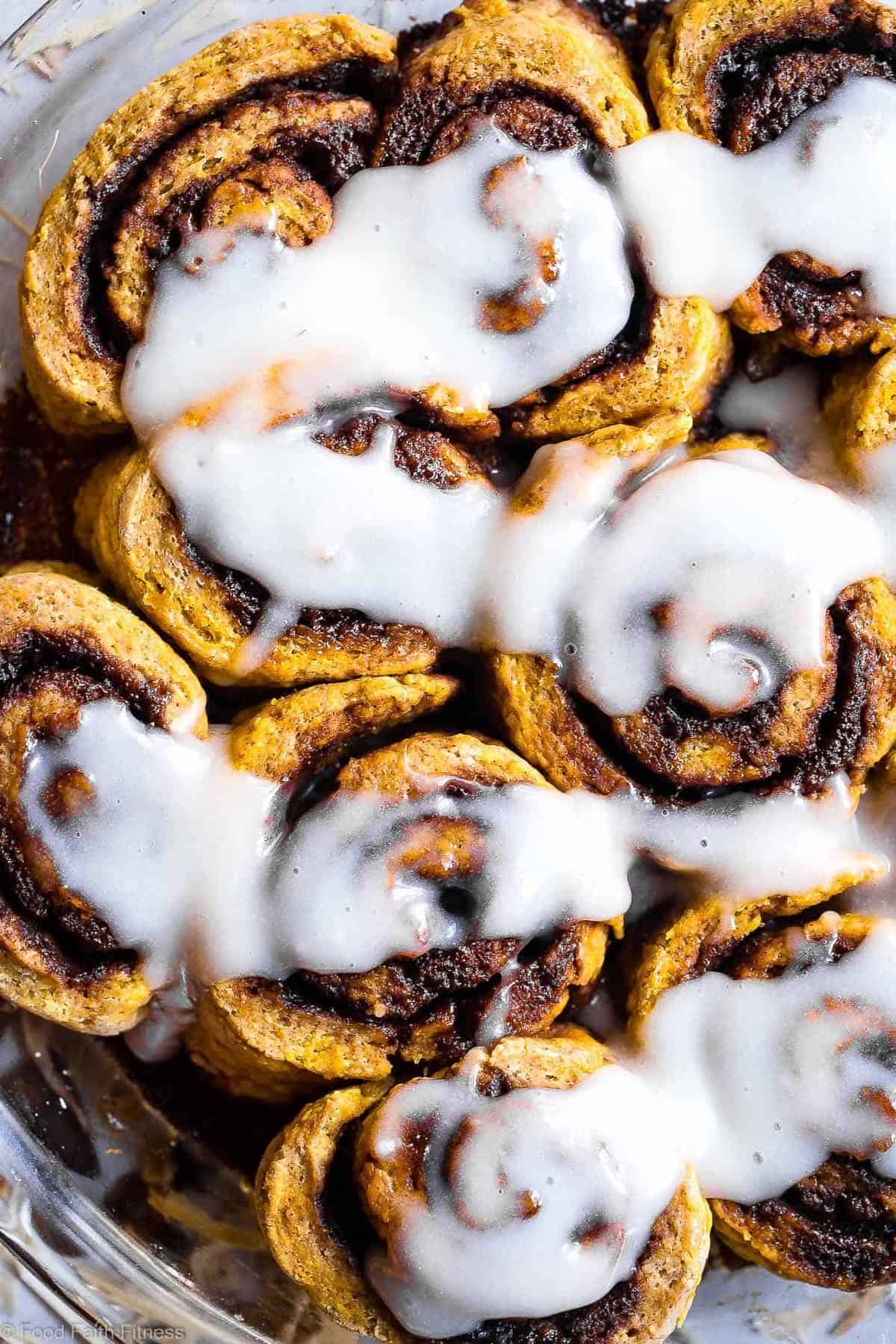 So ooey. SO GOOEY. So SPICY-SWEET and BUTTERY.

I mean, the rest of the cinnamon roll is VRY VRY tasty and you will like it. Just thought your life would benefit from the “how I ate them” knowledge.

Typically, no. Cinnamon rolls use eggs as the binder which is NOT vegan. They also use dairy a lot of the time.

But, because pumpkin has binding qualities, we’re able to use it to make these vegan-friendly! The yogurt in here is also a Greek-style dairy free yogurt. 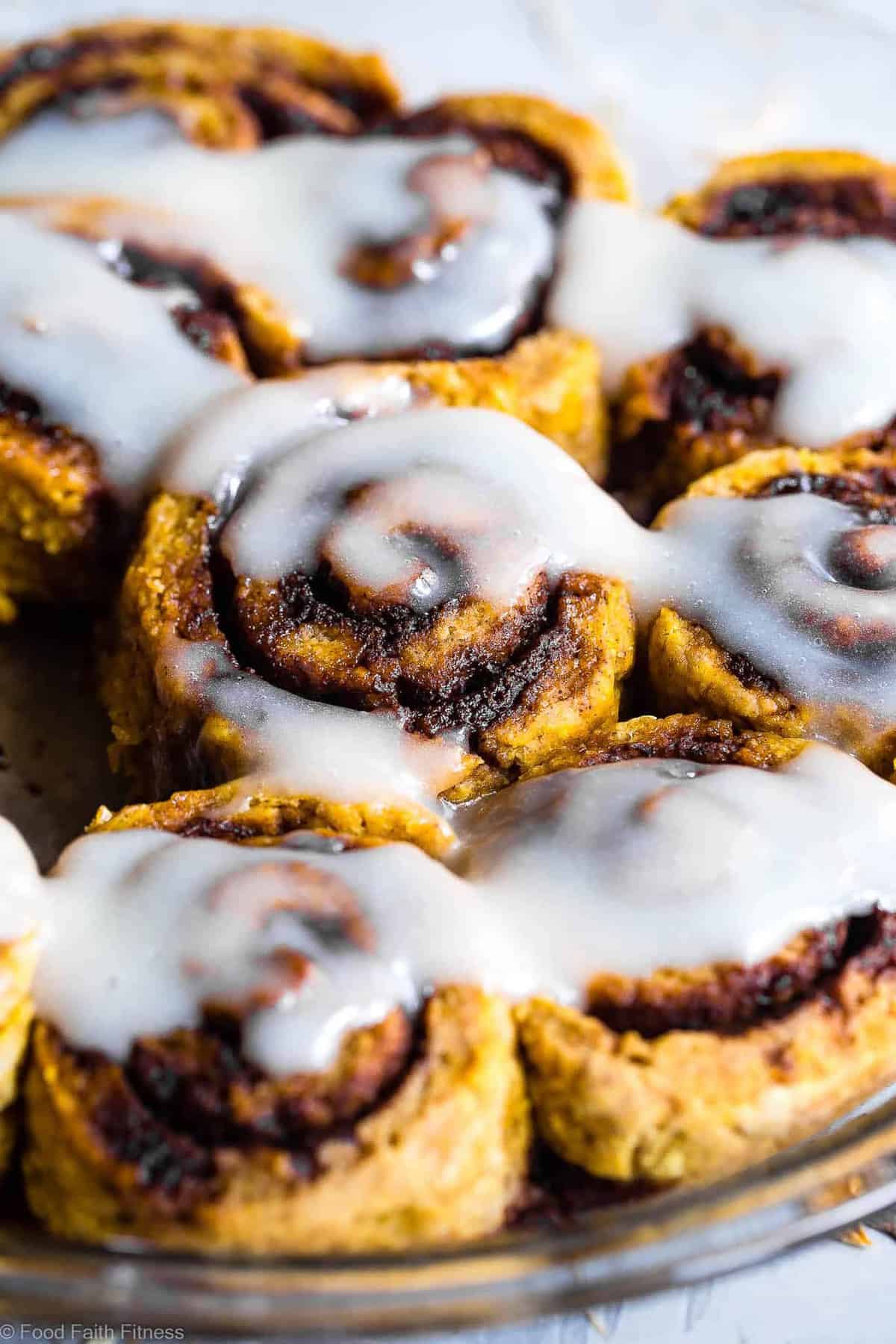 If you’re not dairy-free and don’t want to buy special ingredients to make dairy free cinnamon rolls, I GOT YOU.

Dairy-free Butter – use whatever butter you have on hand. All will equal delicious, tender baked goods!

Dairy-Free Yogurt – you can most definitely do a swap-er-oo of “normal” Greek yogurt here!

Vanilla almond milk – you can use unsweetened plain almond milk, or even 1 or 2% cow’s milk!

This vegan cinnamon roll recipe, with its festively-Fall-feels is made for ALL the people of the world. 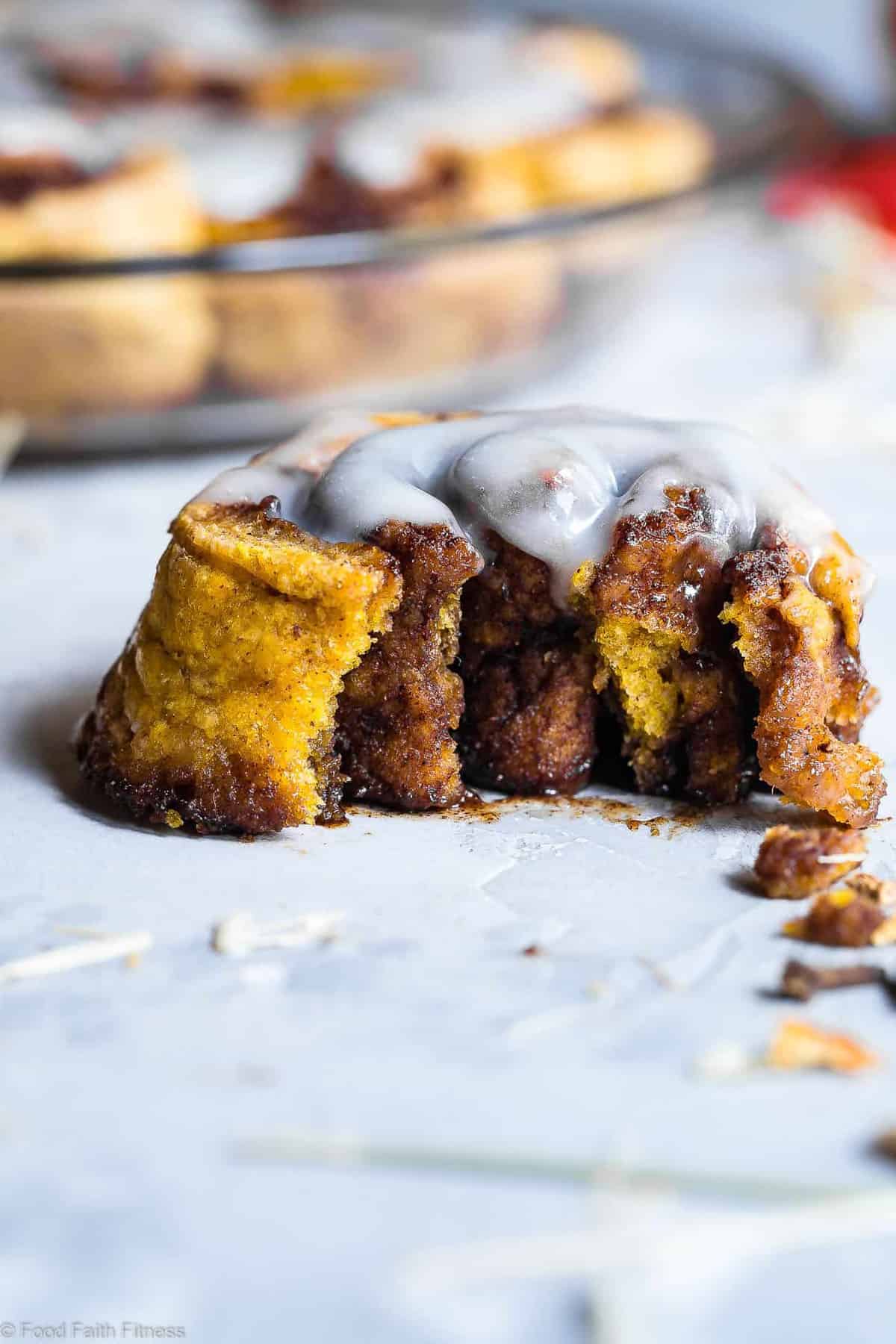 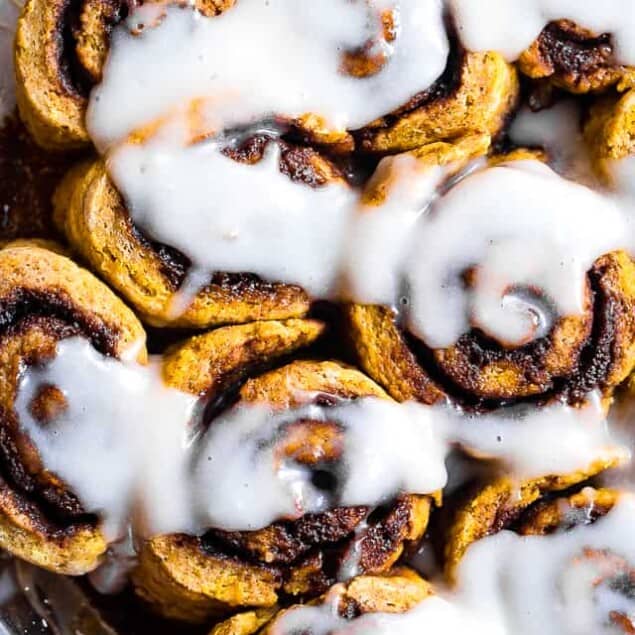 For the cinnamon rolls:

*As with all gluten free baking, please weigh your flour to ensure result

Weight Watchers Points Per Serving: Freestyle SmartPoints: 9  Points+: 5. Old Points: 5
(Per bun, based on 10 buns  – add about 50 cals if you use regular powdered sugar) 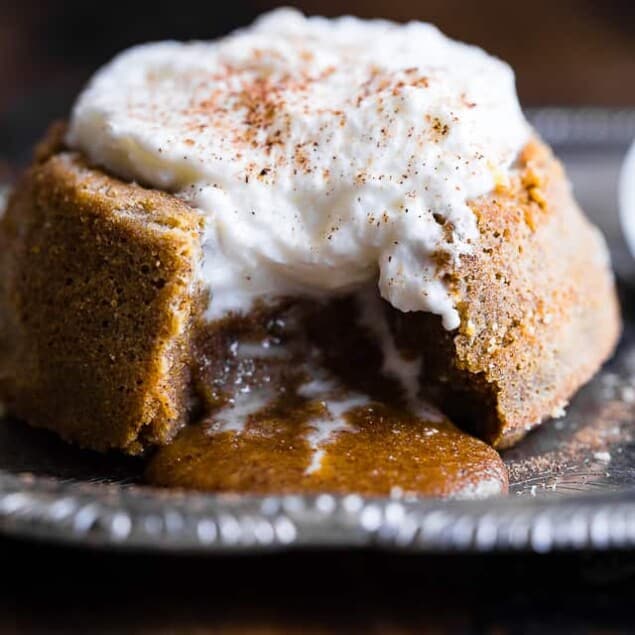 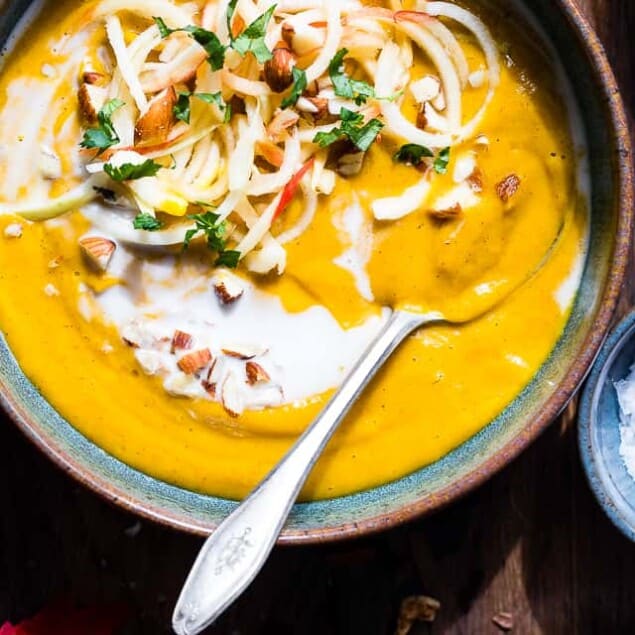