END_OF_DOCUMENT_TOKEN_TO_BE_REPLACED

This spiralized butternut squash salad is full of apples, dates and pecans. It has a spicy-sweet flavor and is a healthy, paleo and vegan friendly side dish! 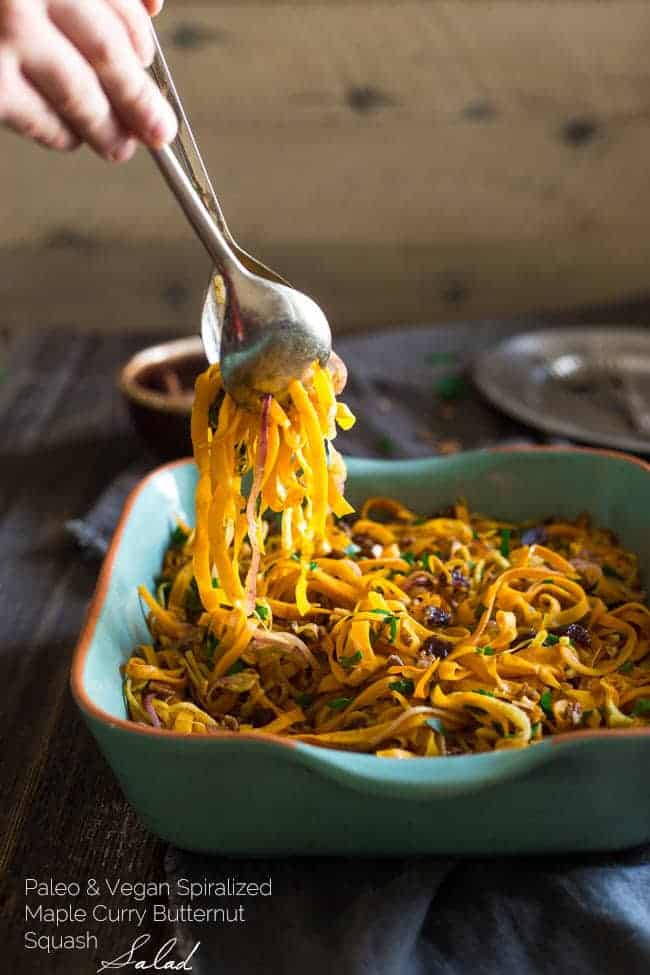 Umm, I don’t mean to scare you but, like…

IT’S ALMOST NOVEMBER GUYS. Aka: time to wear 3000 scarves AT ONCE (remove said scarves before operating a vehicle though, because they MAY hinder your eyeballs ability to SEE) WHILE face planting into ALL the bowls of cozy-comfy food that your hungry little-keep-me-warm-through-the-cold-days self can get your FACE IN.

Don’t lie. I know you’re already miffed that I’m making you come out of your head-in-bowl slurpfest of cauliflower soup to read this post. I know how you WORK.

Have no fear, I have a feeling that you’re about to go from being an angry-why-can’t-I-soup-slurp in peace sort of person to someone who is like “SQOODLES ARE THE NEW SOUP FOREVER AND EVER THE END.” 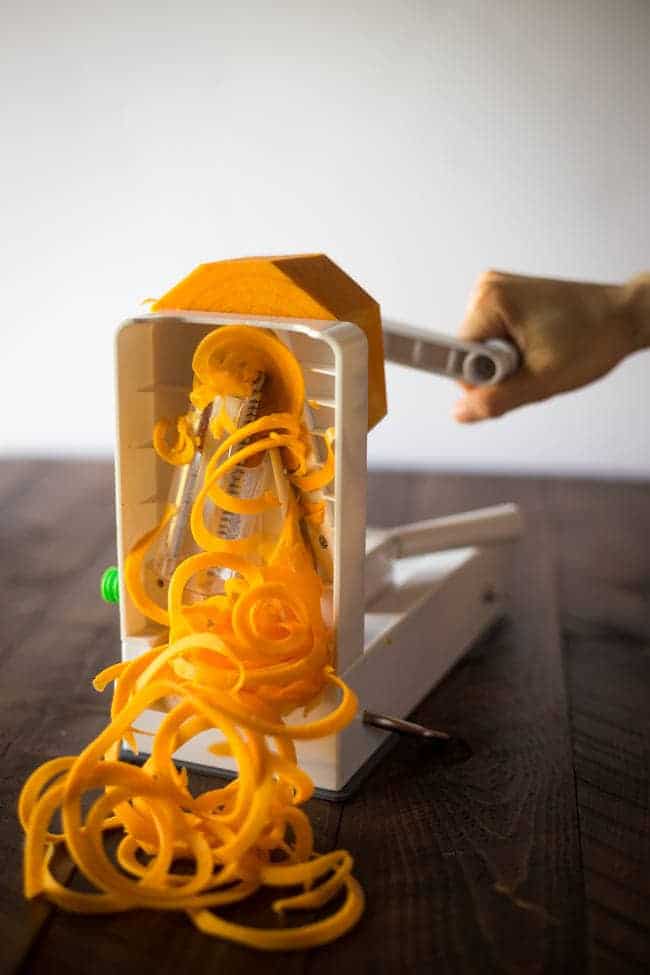 Except before you can declare that sqoodles are your new EVERYTHING and devote your entire life to eating them (that is less of an exaggeration than you MIGHT THINK) you’re probably sitting there, soup dripping down your chin (why are you so attractive? It’s distracting) scratching your noggin’ and wondering what a “sqoodle” is.

GUYS. SQOODLE = SQUASH NOODLES. Like I am obsessing over something that is NOT a sweet potato noodle. You’re shocked right? Since we’ve eaten our weight in them. You thought I would never VENTURE AWAY from them. 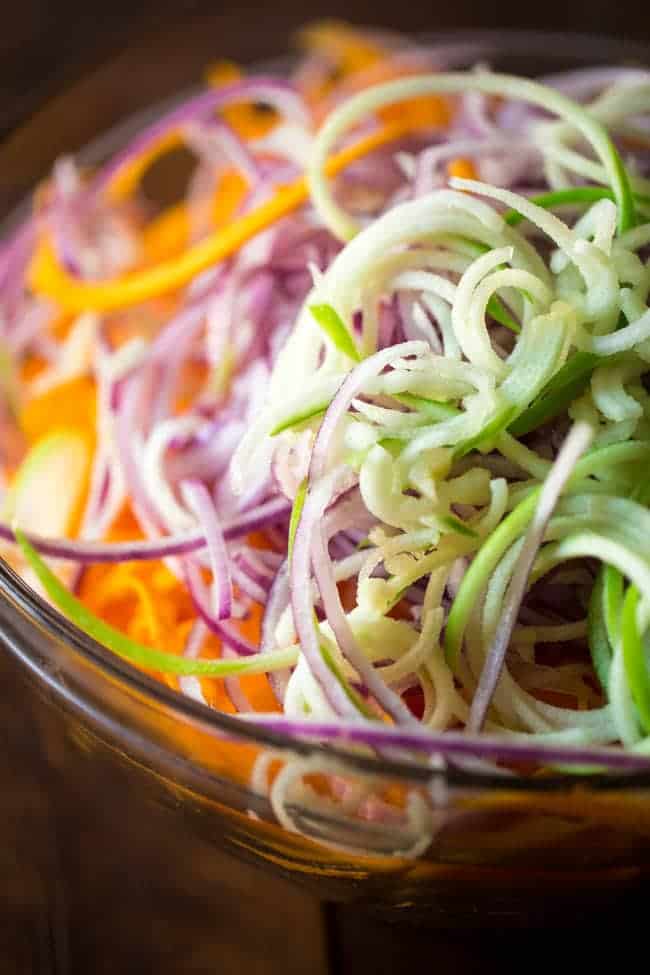 No really though. Butternut Squash Noodles. Mixed with fresh and crispy apple noodles, zippy red onion noodles (so much noodle, so little time,) drizzled with maple syrup, bursting with Hi-I’m-Autumn-and-I-taste-like-WHOA spices: cinnamon, ginger and allspice, PLUSPLUSPLUS that SURPRISE curry powder that makes its appearance at the very last second leaving your taste buds being all “HOLD THE PHONE, I DON’T KNOW WHAT WE JUST ATE, BUT WE’RE NOT MAD ABOUT IT.”

You guys. ALL the fall feels in ONE tender-caramelized-sweet and healthy side dish. ALL. OF. THEM.

Ooooohhhh dates too! Like, those squishy little fruits that add perfect-pops of sweetness and texture among the tangles of spicy-roasted veggie noodles. Did I mention crunchy pecans? Crunchy chewy texture vibes exploding out of this salad guys. FER REAL. 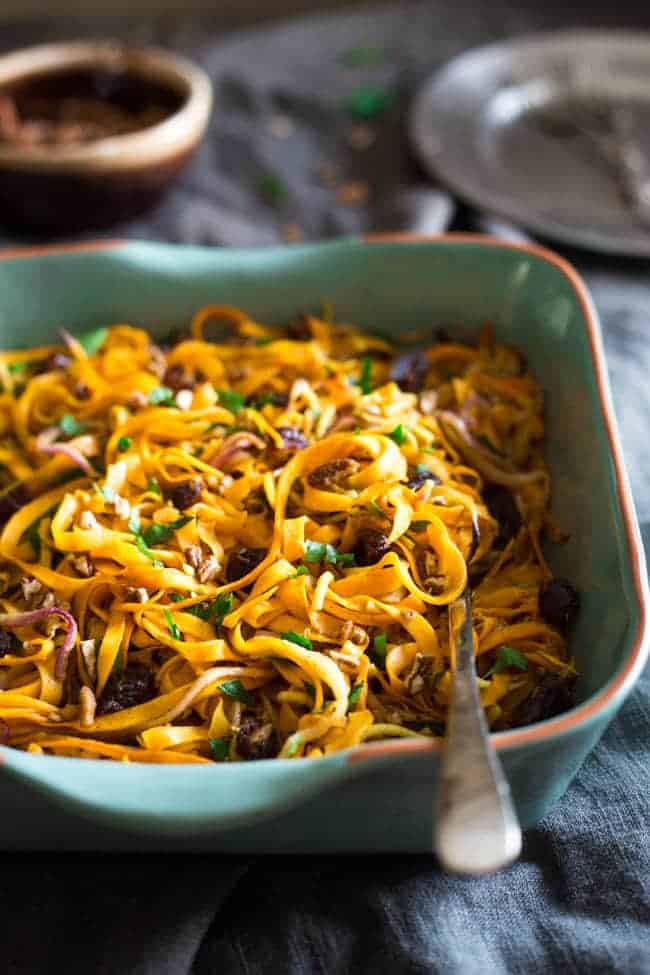 You know what though? Sqoodles used to be something that I was only able to dream about. I tried to make them and my spiralizer just would NOT cooperate. I had some gorgeous tangles of perfectly long noodles aaaaand some HUGE, wide and totally-awkward noodles that my spiralizer would just.not.cut.

I almost gave up, destined to a life of sweet potato noodles ALWAYS. Not that it’s a bad thing,but you know what they say about variety?

It’s the best. Or something to that affect.

But then my friend Ali from Inspiralized sent me here new Inspiralizer to test out. HOLY PERFECT SQUASH NOODLES BATMAN. As you guessed from previous sentence, they made sqoodles like I had never had before. 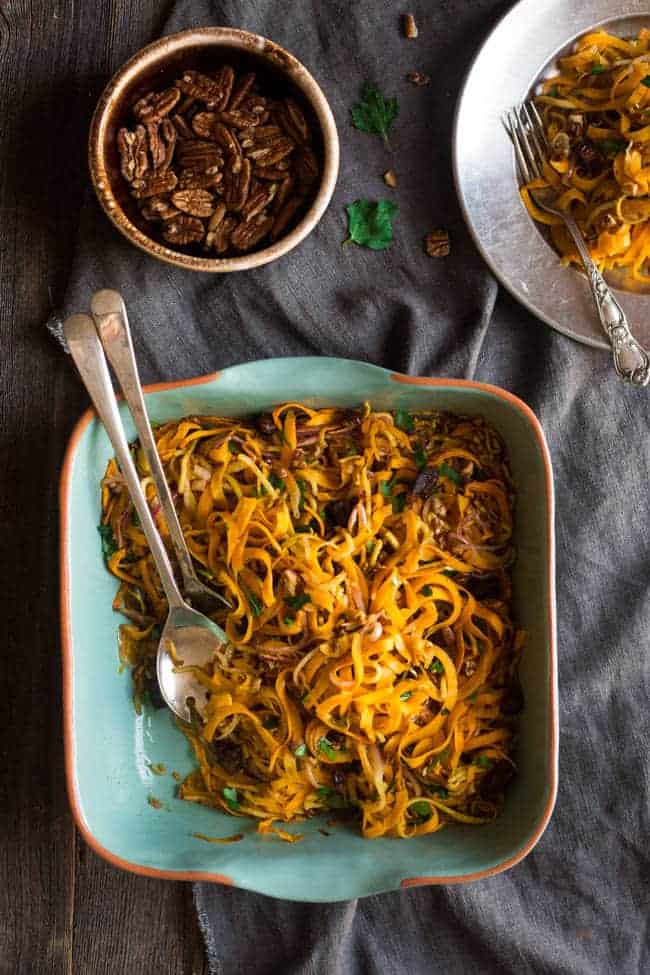 Ie: They actually were noodle-y. And pretty. And then I obsessed. You guessed that already though.

Legit. I gave my old spiralizer to my mom (Hi Momma!)

I see no use for something that puts any kind of gap between my squash loving self and, well, squash.

Before you go and dump you not-quite-as-appealing-anymore-soup, let me just subliminally message your mind for a second: 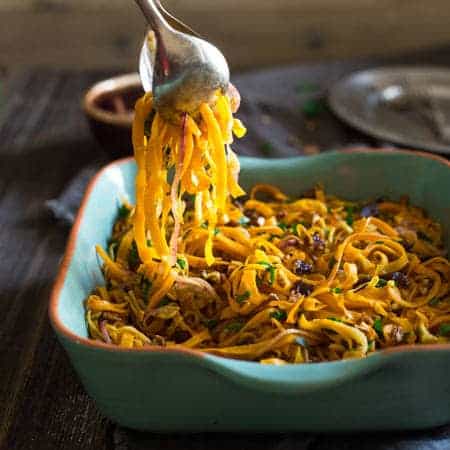 * To make it easier to serve, cut the noodles in the baking dish before dividing between plates.

Author: Taylor
Course:Salad, Side Dish
Cuisine:American
Share your creationsTag @foodfaithfit and hashtag it #foodfaithfitness so I can see what you made!
Rate It 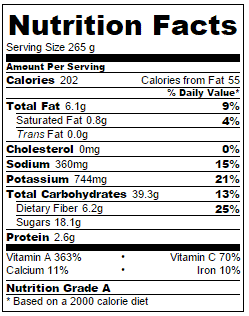 (based off of 8 servings)

Want to try the Inspiralizer for yourself? Click HERE! Just so you know, it’s not available on Amazon as it’s the official spiralizer of Inspiralized! 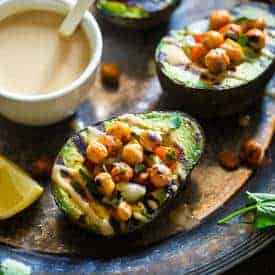 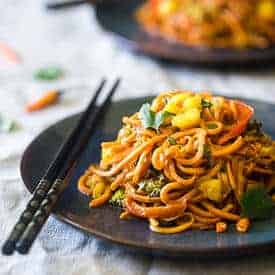 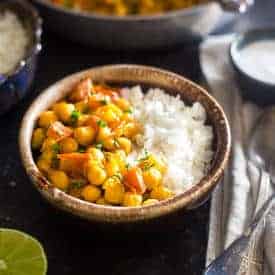 Other butternut squash noodles from Inspiralized: 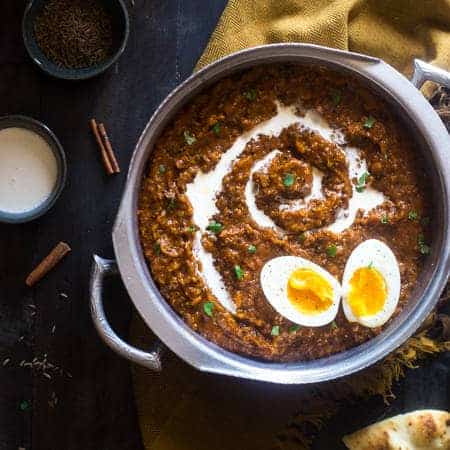 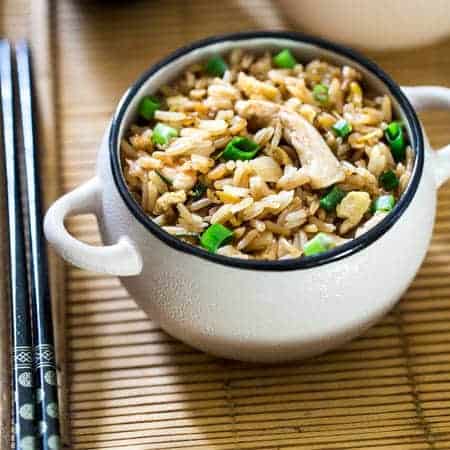