END_OF_DOCUMENT_TOKEN_TO_BE_REPLACED

Tilapia is complemented by a skinny version of Thai peanut sauce, in this quick and healthy dinner. It’s salty and sweet! 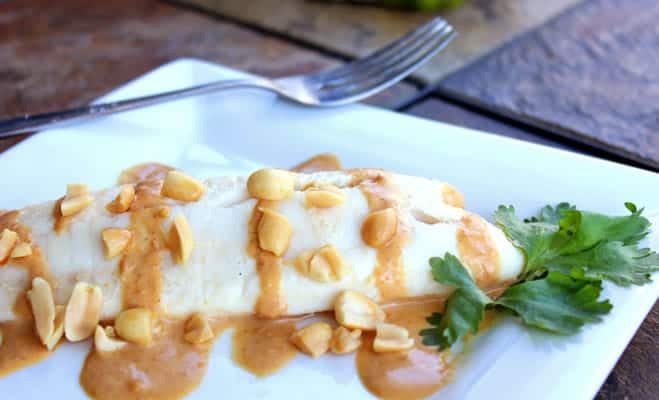 Whoever said Tuna was chicken of the sea lied. I could make a solid case for tilapia to take that role. Plus, have you ever smelled a can of tuna? I don’t know what they do to poor canned tuna that makes it smell that way, ’cause tuna steak sure does not. Although I am sure those tuna fish did something to deserve it. Canned tuna is probably the rebellious ones that wouldn’t listen to the parents….into the can for you! I am totally telling that to my future children when they wont listen to me. Please don’t call social services guys, I’m kidding. I swear.

Anyways, back to tilapia.

Like I mentioned, I think my fishy friend is just as versatile as chicken. The flavor is super light, and not fishy in the least. Personally, I find the texture of tilapia even better than chicken as well. It’s flaky and moist, and harder to over-cook than chicken. Have you even eaten an over cooked chicken breast recipe? Or should I ask if you ever eaten a piece of rope. Man, that chicken can get tough! I’m lucky to have a fabulous grill-master for a husband, so I am never stuck eating rope for dinner.

I’m all about quick, meals lately, especially with being knee-deep in moving. If it takes less time than I have fingers and toes, I am so in. This doesn’t take less time than that, but lets just use our imaginations and pretend we have just a couple more digits. Just for a few minutes. At my household, we live for  ethnic flavors. Unfortunately, those usually don’t translate to quick and easy. That obviously needed to change.

You can never EVER go wrong with peanut butter. But, peanut butter and lime?! That is some good flavor mingling right there. This peanut sauce is a great staple to have in your recipe box to put over any Asian-inspired dish. I use it for stir frys, pad thai, lettuce wraps…you name it. It’s pure deliciousness. It creates such a creamy, smooth sauce with just the right hit of tang and sweet. Along with a flaky piece of tilapia….oh my! You have got yourself a quick easy dinner, with some ethnic flair. And, did I mention it is slashes more than half the fat of a regular peanut butter sauce? 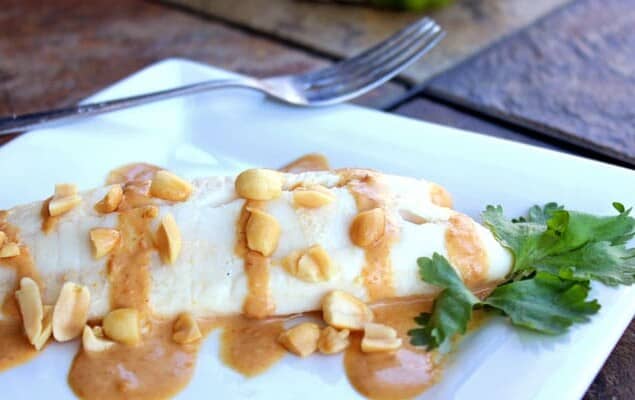 Author: Tate
Course:Dinner, Main Course
Cuisine:Asian
Share your creationsTag @foodfaithfit and hashtag it #foodfaithfitness so I can see what you made!
Rate It 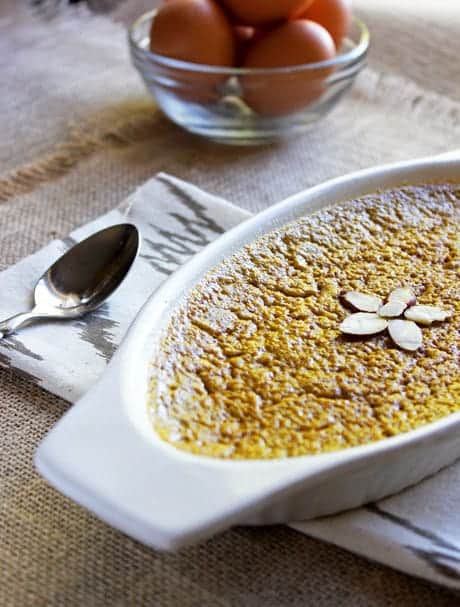