END_OF_DOCUMENT_TOKEN_TO_BE_REPLACED

This cauliflower casserole has the taste of Thai peanut sauce, chicken and lots of fresh veggies! It’s a healthy, low carb and gluten free weeknight meal that’s only 220 calories! 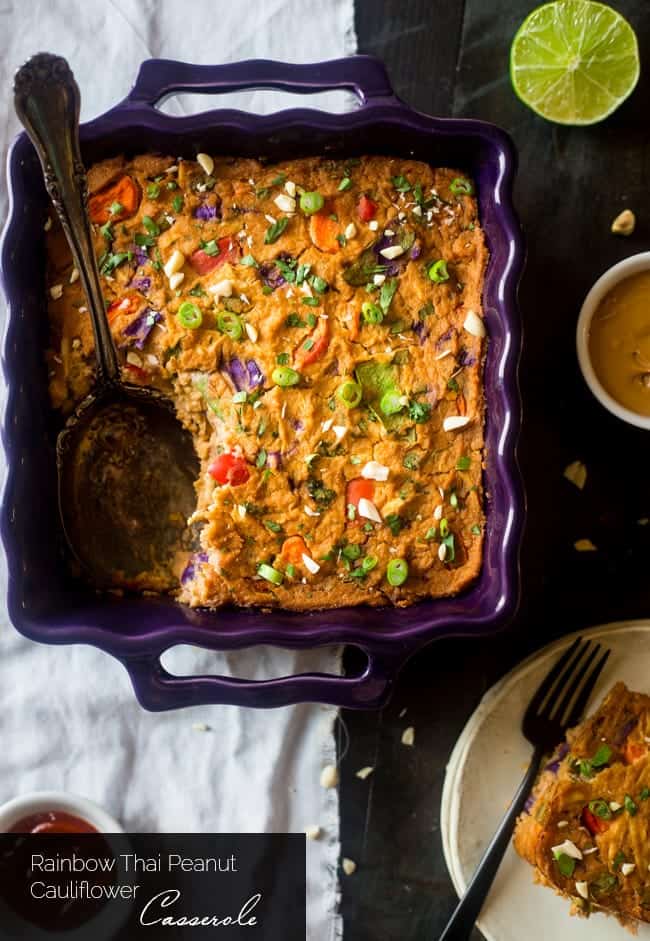 And there you have it. We have ANOTHER way to eat cauliflower.

I mean, liiike, once I discovered the wonderful creations that are cauliflower rice, cauliflower pizza, roasted cauliflower,  ANDDDD cauliflower fritters, I figured that cauliflower’s work here is DONE.

Vegetables can USUALLY only go so far you know? But APPARENTLY, this crunchy, colorless, seemingly ULTRA-boring veggie friend of ours is breaking ALL THE RULES. 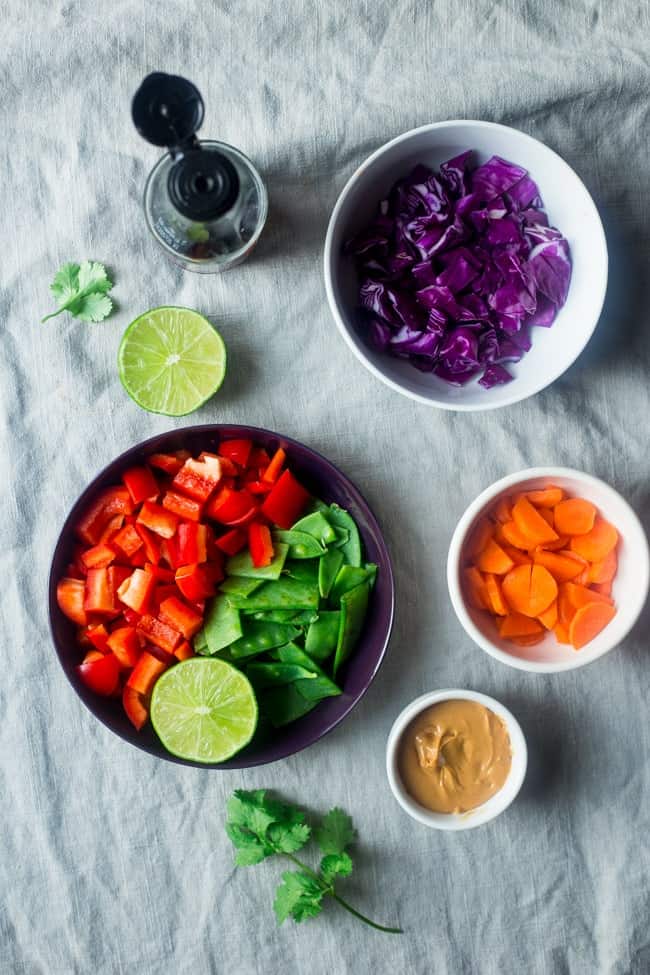 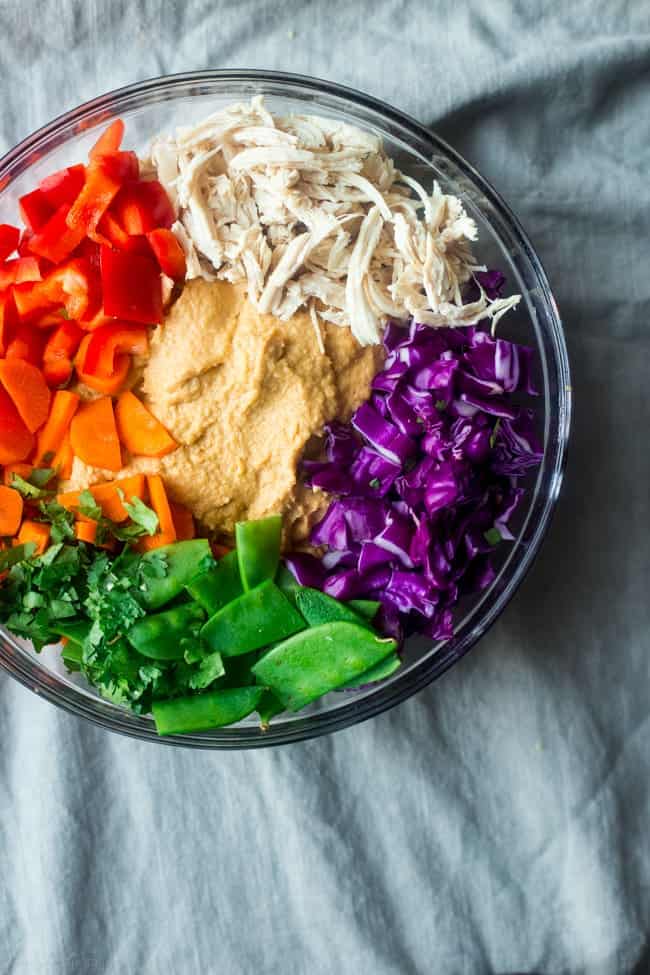 Rainbow Thai Chicken Cauliflower CASSEROLE. It’s a new thing that I’ve been eating left, right, center, up down and forever since it entered the land of my food dreams. Think super thick and creamy deliciousness with a mish-mash of vibrantly-rainbow-colored tender-crisp and crunchy veggies. THENTHENTHEN, think of that ALLL mixed up with double-the-nutty peanut butter AND peanut butter powder, and bursting with tangy lime juice and salty fish sauce.

With sriracha. Because I know that your mouth loves the combination of creamy coconut milk, slightly-sweet peanut butter with juuuuust a hint of spice to keep those taste buds tingling.

Is there truly anything better than Thai peanut ANYTHING guys? I’m beginning to think that there is not. 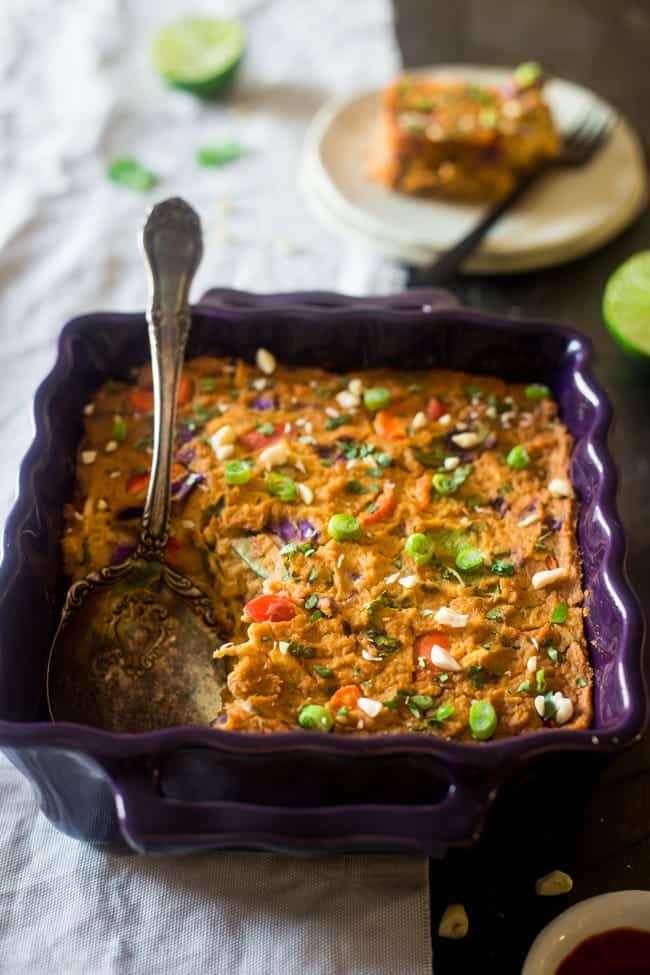 When in doubt, whip the Thai Peanut out! Or something.
So, behind the scenes scoop of my life moment happening right now. When I was making this recipe to bring to your peanut-y food loving faces, I almost THREW IT OUT. Like, in the garbage, out the window, whatever, just get out of my kitchen! Guys, before this ultra-simple and totally weeknight-friendly casserole went into the oven it was just B-L-A-H.
Liiiiike, I made The Huberoni try some of it pre-cooking and asked him what he thought. His response was PREE MUCH the worst thing that you could ever say to a food blogger. EVER.“It’s good. But I wouldn’t be excited about eating it.”I think he secretly just wanted me to make it a Cajun cauliflower casserole. Remember the zucchini noodles blueberry basil wraps where I told you that his secret dream is just for me to make ANYTHING Cajun flavored?I think that was also part of what was happening here. He was just BLINDED by one pot jambalaya if you know what I mean.

Just like the casserole: My healthy, but TASTY, food blogging goals went OUT the window. Crash and BURN. 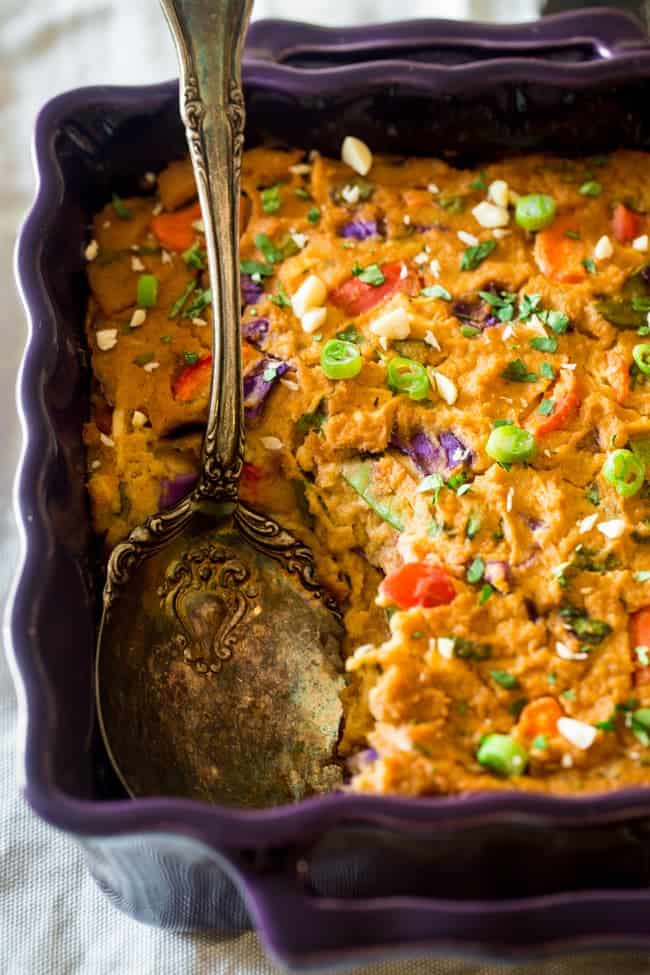 The last ditch effort was to chuck it in the oven and hope. Fingers and toes CROSSED.

Then 40 minutes later happened and it was time to come out of the oven. CAN YOU FEEL THE NERVOUS ENERGY THAT WAS IN THE KITCHEN? I might be being a little bit dramatic but, guys, use your imagination. It’s ALL about the STORY.

It smelled good. It didn’t look good. BUT, in cauliflower casseroles defense, do they EVER look beautiful? Exactly.

Finally. It was time for THE BITE. My teeth sunk into each still-crisp and colorful vegetable and my tongue tasted the salty-sweet combination of coconut sugar and fish sauce, followed up by a PUNCH of peanuty-flavor with a hint of heat. Plus, tender, protein-packed chicken in EVERY. SINGLE. MOUTHFUL.
UHMMM WHOA. Love at 400 degrees HAPPENING BIG TIME.
Rainbow Thai Cauliflower Casserole. I will never almost throw you out the window again.The only place that this casserole will be thrown is straight up into YOUR FACE. 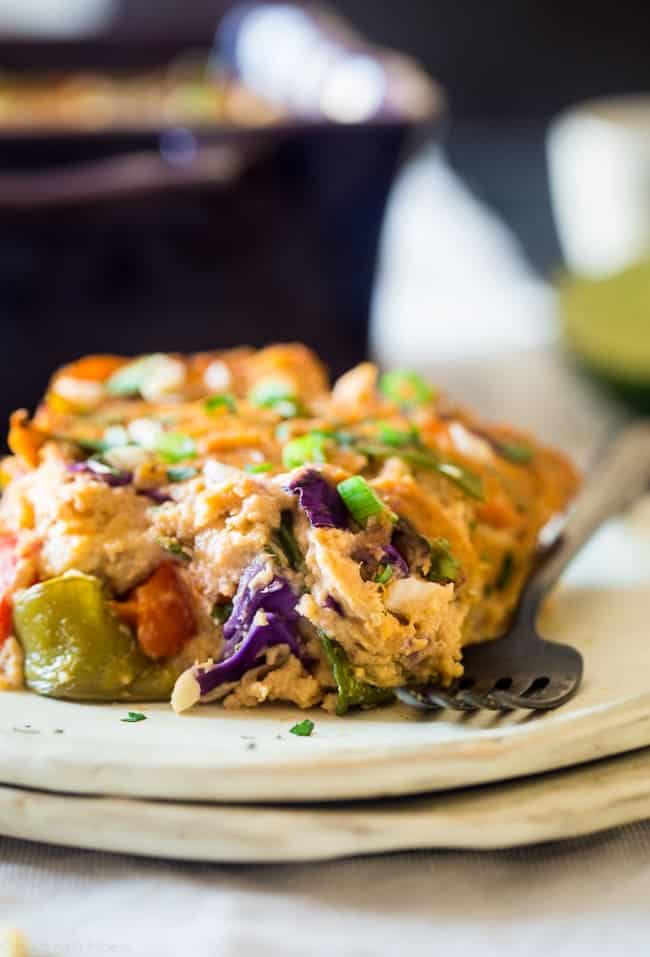 I also shared the Thai Chicken Cauliflower Casserole Recipe over on Food Fanatic, so be sure to check it out there! 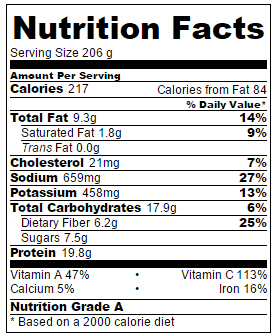 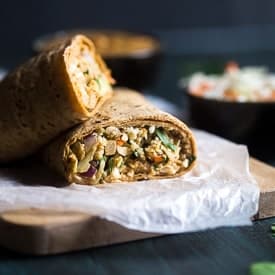 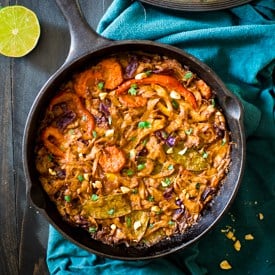 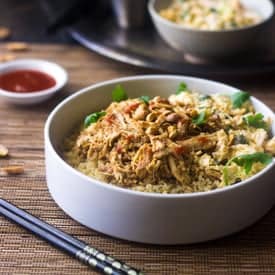 Cauliflower Casseroles from around the web: 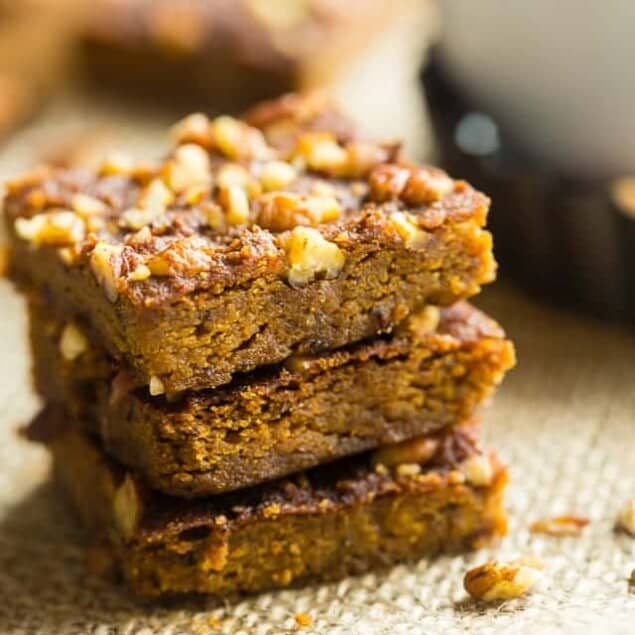 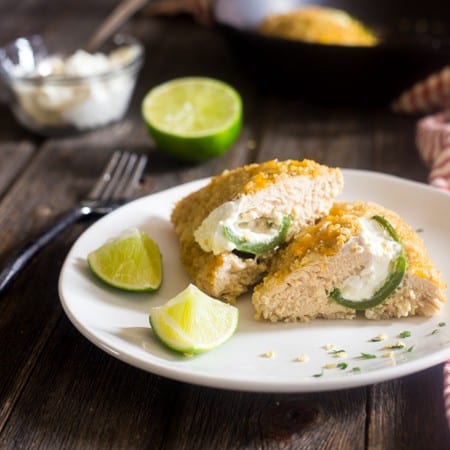