END_OF_DOCUMENT_TOKEN_TO_BE_REPLACED

By Taylor KiserOct 9, 2017Jump to Recipe 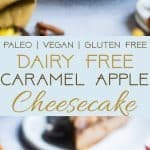 Just wanted you to know that this fall-inspired cheesecake is sponsored by my friends over at Amoretti!

This fall-inspired caramel apple paleo cheesecake is SO creamy you will never believe it’s healthy and gluten, grain, dairy free and vegan friendly! 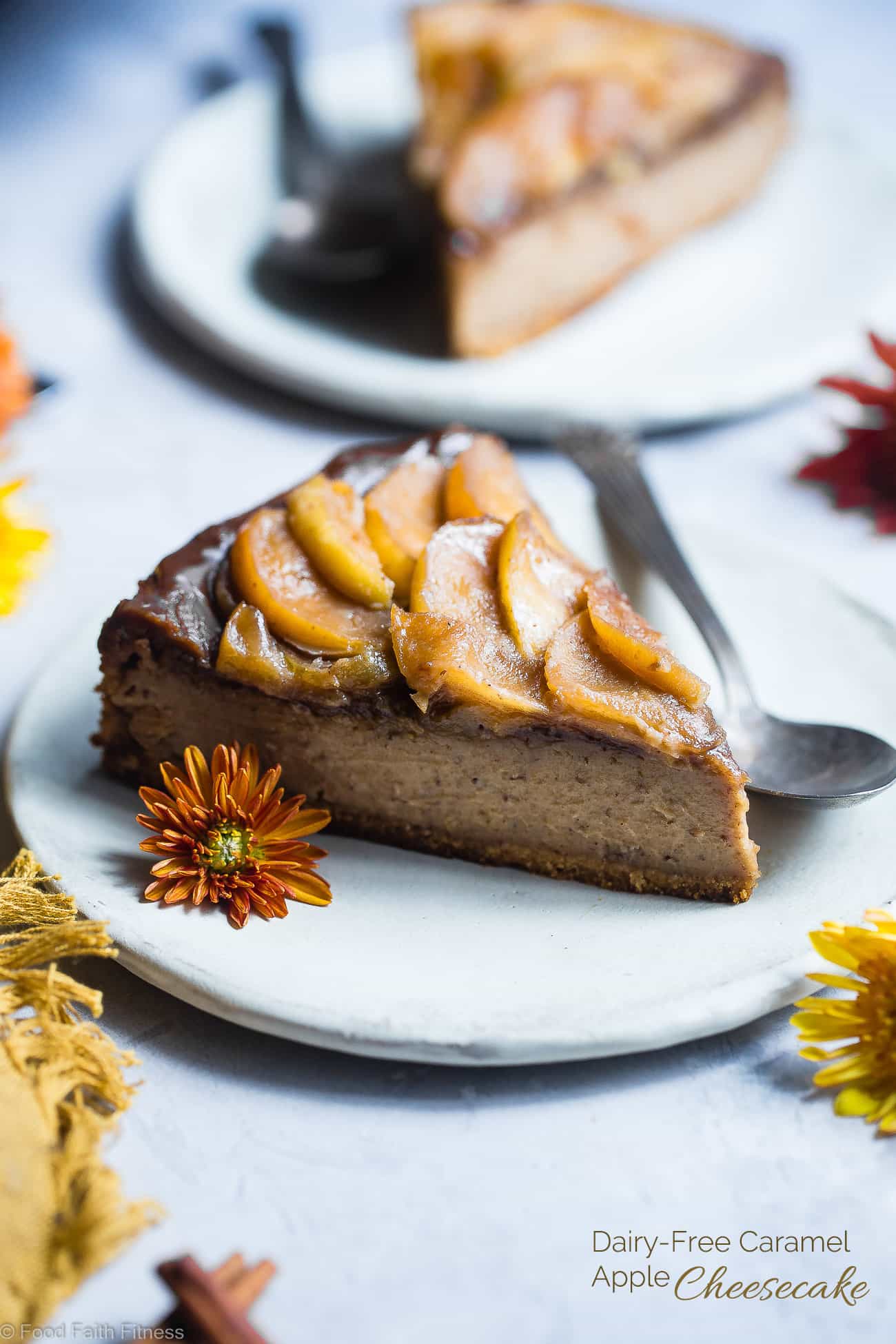 This grain free cheesecake is literally sitting on the table staring at me right now.

Luring me in with her crispy, crunchy, golden brown crust that is the foundation of a velvety smooth and INTENSELY creamy cashew layer, mixed with warm, cozy cinnamon flavors, rich notes of sweet coconut sugar, buttery ghee and that STICKY, DRIPPY caramel topping with tender, spiced apples.

Internet friends. If the fact that I am using my hands to type words to you, and NOT using them to pick up this cheesecake – no utensils REQUIRED- and shove it in my mouth, is not proof enough that I love you dearly… I DON’T KNOW WHAT IS.

By now you’ve learned of the love-affair that I have with turning cashews –> cream –> adding healthy-real-food ingredients like flax, apple sauce and natural, wholesome sweeteners –> GRAIN FREE CHEESECAKE. 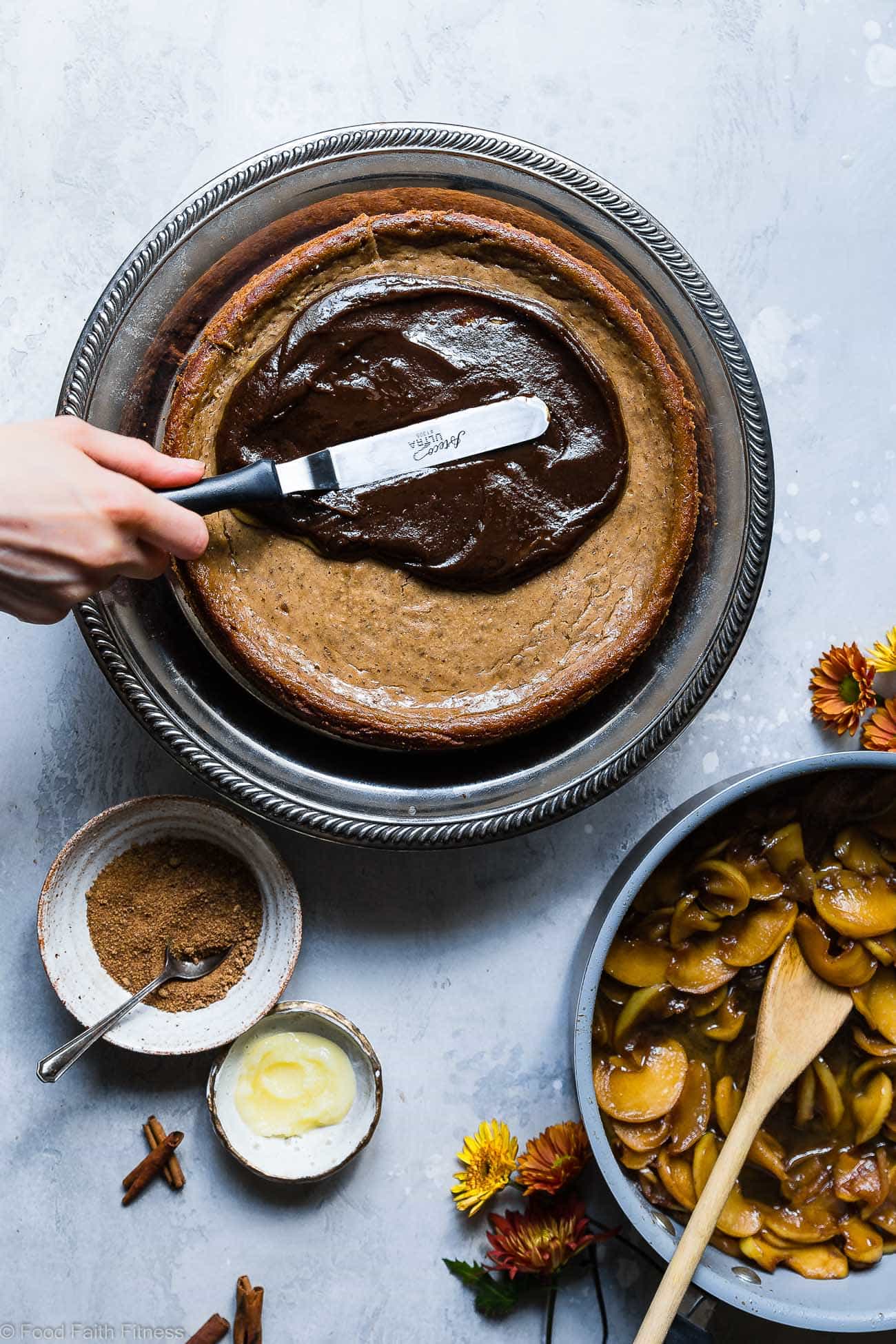 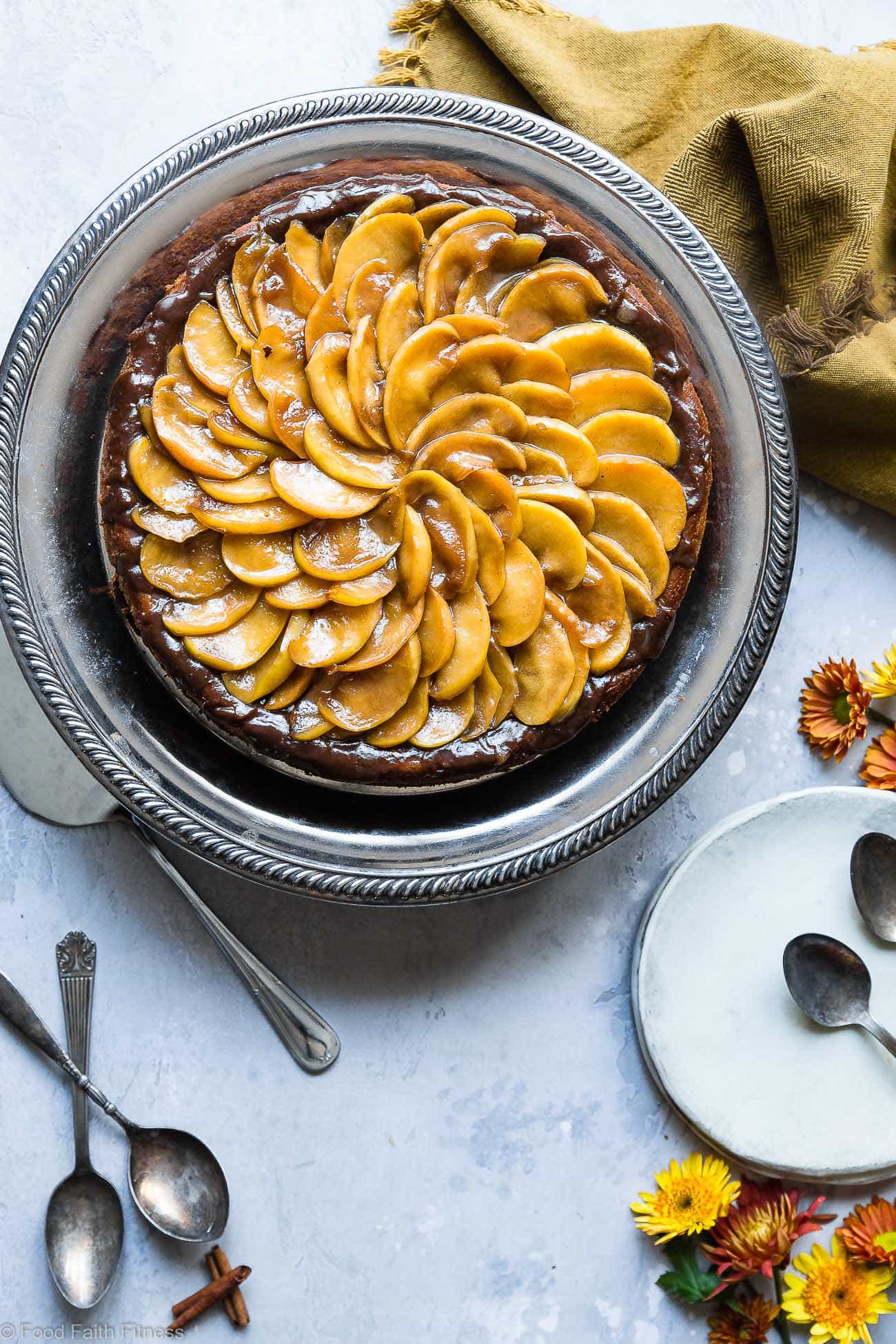 In my mind, there are 2 dessert flavors that make me think of the coziness of fall in food-form: pumpkin spice (liiike, duh) and caramel apple. Realistically, I also think that caramel apple should be a “like, duh” but for some reason all the people of the world just HONE in on pumpkin spice ALL THE THINGS, and I feel like things like caramel apple healthy gingersnap recipes just doesn’t get the <3 <3 <3 that they deserve.

Considering we just ate chai gluten free pumpkin cheesecake, it was time to bring the cashew-cheesecake obsession into the CARAMEL APPLE territory. But first:

How Do You Make Paleo Cheesecake?

There are a few ways to do this – both use cashew cream and one variety is frozen whereas one is baked. I MUCH prefer the baked version because it’s ultra creamy and velvety smooth just like a “real cheesecake”

Now that you know how to do it, question: Do you ever have that moment in your life when something just CLICKS, and you feel like you have discovered your very soul’s purpose and reason for being placed on this Earth? 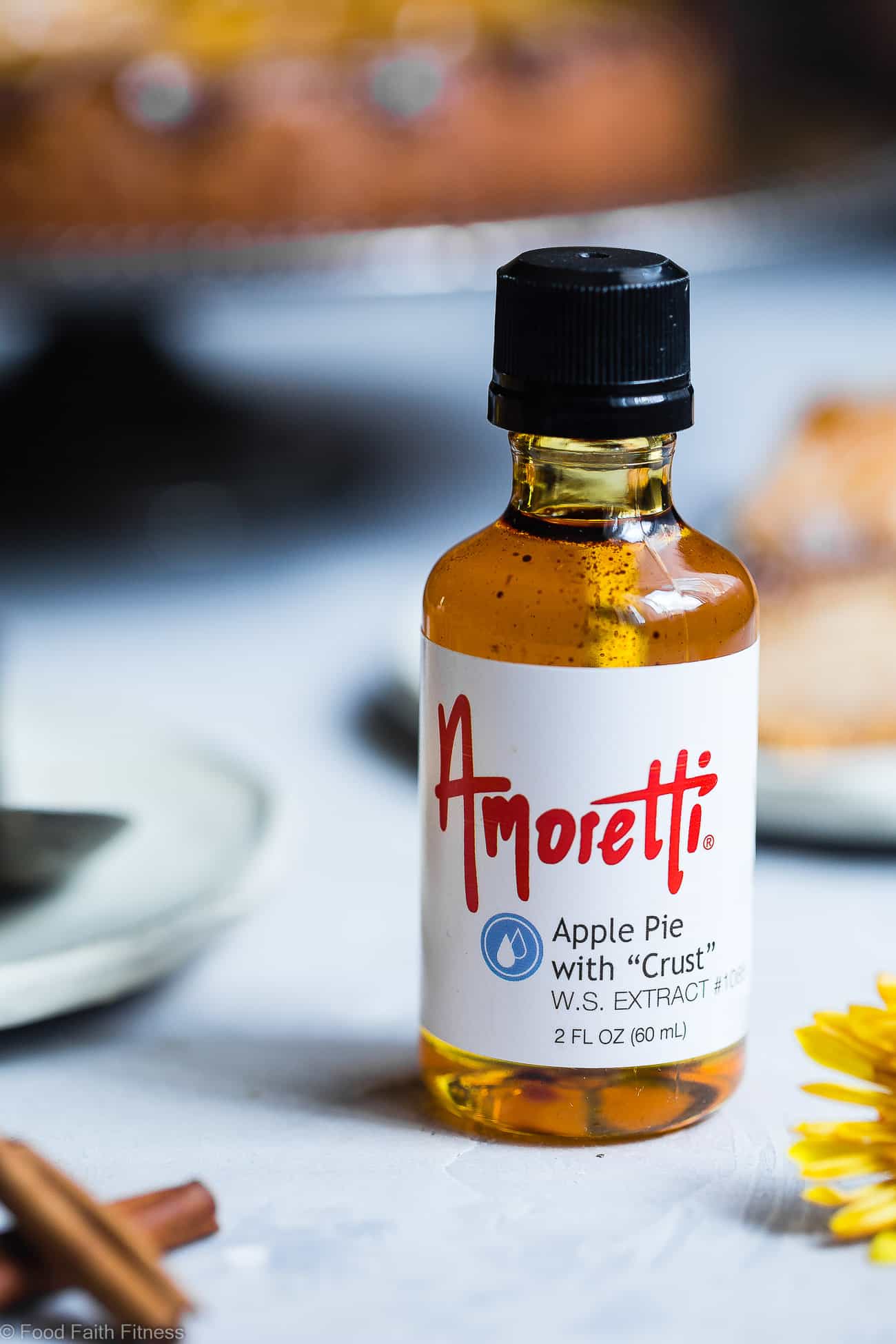 That was MY LIFE when I discovered Amoretti’s “Apple Pie WITH CRUST” Extract.

Read that again my internet BFF’s who love good food. WITH. CRUST. <– It ACTUALLY tastes like it. Mind blown. Totally IN LOVE.

Like I said, upon this discovery, I knew that my VERY BEING was created to share a caramel apple “cheesecake” with your just-as-food-loving selves.

Uhmmmm, I know I just professed my obsession with dairy free, paleo cheesecake buuuut will you be mad at me if I tell you I am equally addicted to something else at this very moment in time because hi-I’m-Taylor-and-I-can’t-pick-one-thing-to-obsess-over-at-a-time? 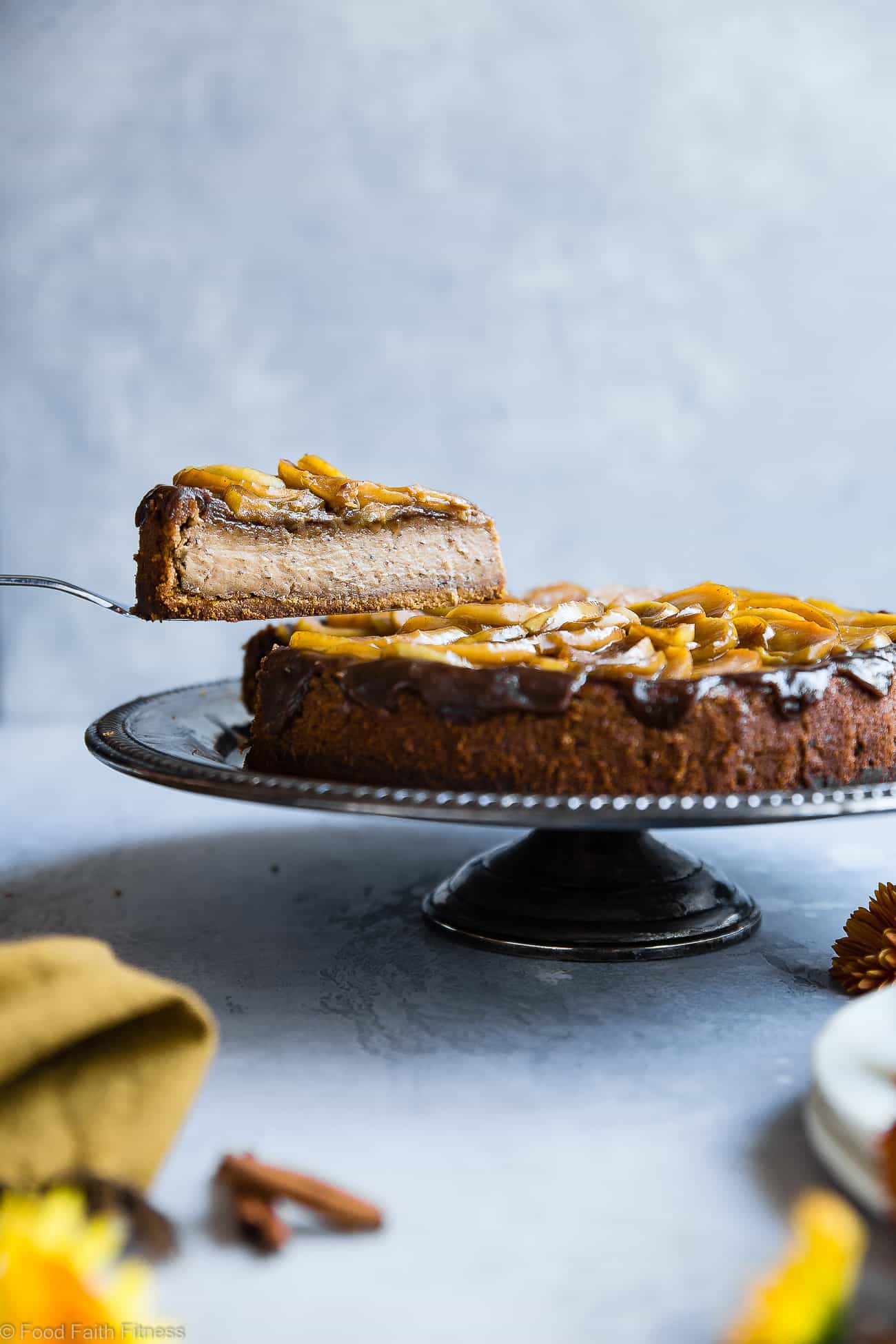 Yes, some varieties of butter are paleo. It has to be high-quality and made form grass-fed cow. However, even still, some people DO NOT like to include it in their diet because of the lactose.

THIS is why, instead of grass-fed BUTTAH in this paleo cheesecake, I we are using Ghee! Ghee is clarified butter. This means it simmers for a long time and has the impurities – like LACTOSE removed. You know what’s not removed though? THE YUM.

It has all the rich, buttery goodness of…well…BUTTER. BUT without the lactose so the Hubs can eat it WITHOUT DOOM AND DEATH AND OTHER BAD THINGS. I’ve been using it to make caramel sauce for his morning homemade caramel vanilla iced coffee and it is SO GOOD.

Plus, it gives the VRYVRY necessary yumminess to the drippy caramel and cinnamon-spiced apples that crown the top of this beautiful little lady, glistening with shiny, melty coconut sugar BLISS.

NEXT LEVEL DELICIOUSNESS my friends.

Let’s all agree to take a little step back from the pumpkin spice fascination that threatens to overshadow all the other warm-and-fuzzy fall flavors. 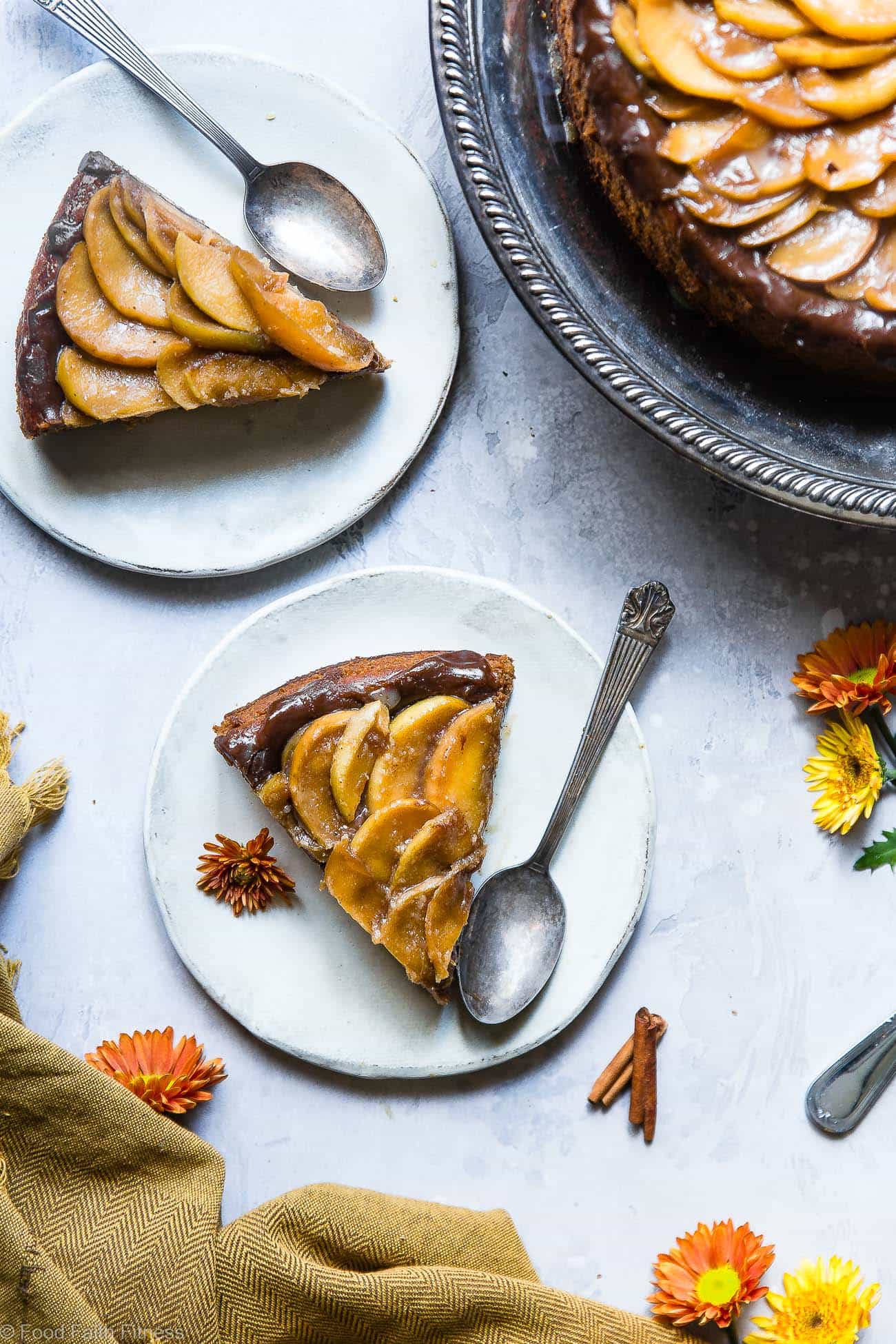 There’s always room to welcome a slice of apple-caramel yumminess with open MOUTHS. 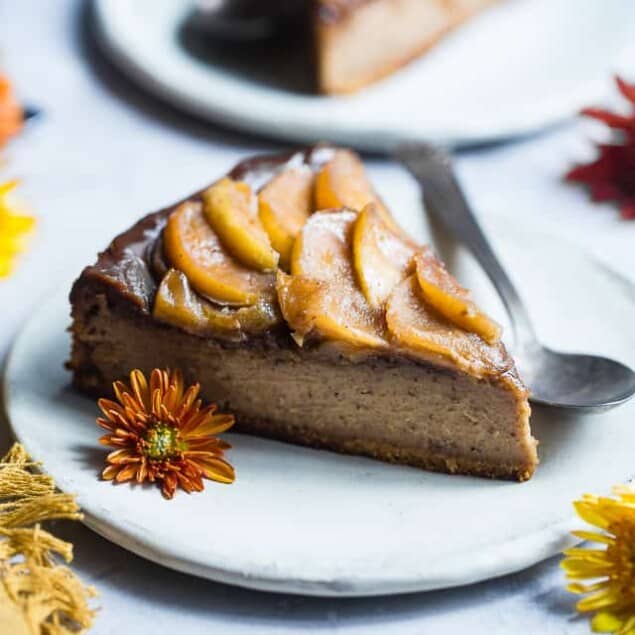 *I buy my cashews pre-roasted. If you're aren't, stick them in a 400 degree oven for just a few minutes, until lightly golden brown. **I've made this crust with different brands of coconut flour and, to get 66g, some brands need less than 3/4 cup. So, I STRONGLY urge you to weigh your flour to make sure you get perfect results.

AMORETTI IS BEING FAB AND GIVING 10 OF YOU A CHANCE TO WIN YOUR OWN BAG OF APPLE PIE WITH CRUST EXTRACT SO YOU CAN MAKE THIS CHEESECAKE! ENTRY IS SUPER SIMPLE, JUST USE THE WIDGET BELOW!

This giveaway will run from 10/09/2017 until 10/16/2017. 10 winners will be and contacted via email within 48 hours. The winners have 48 hours to claim their prize, or a new winner will be selected in their place. Open to residents of the USA and Canada only 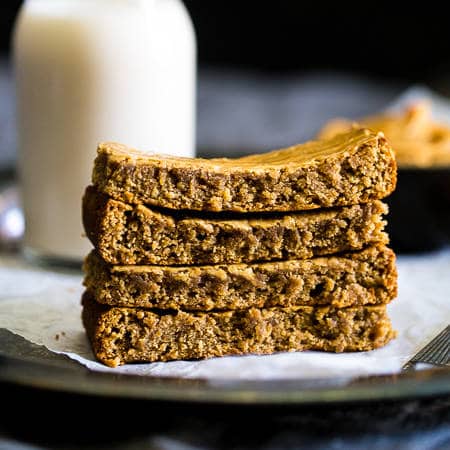 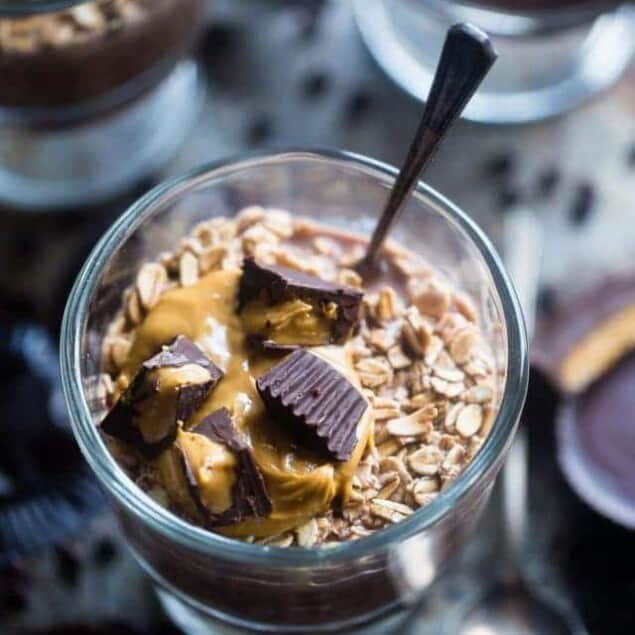