END_OF_DOCUMENT_TOKEN_TO_BE_REPLACED

This quinoa salad recipe has almonds, cacao nibs and a blueberry vinaigrette. It’s an easy, gluten free and vegan meal that’s packed with superfoods for only 360 calories! 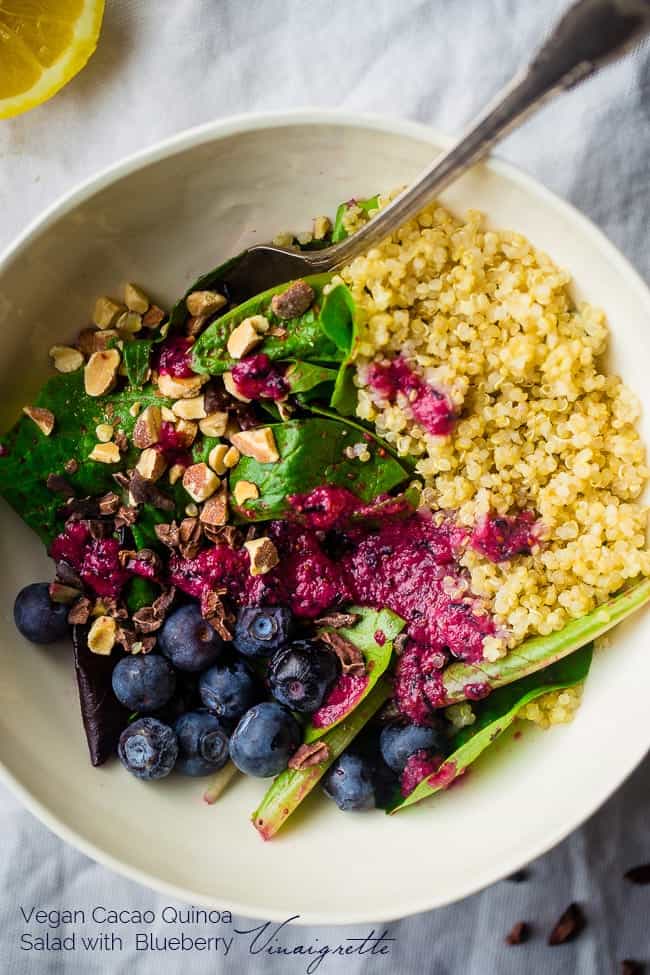 After Mr. FFF laughed at me for pronouncing “cacao” like so, I definitely googled it.

Seriously, what would we do without the internet to save us from the bad lands of wrong-word-pronunciation?

We’d all be wandering around the earth saying Kwin-oh-ahhhhh instead of Keen-wahhh and kah-nif, instead of “knife.”

Mr. Google told me that I, IN FACT, am right about the pronoun cation and the Huborama was 110% wrong to laugh at me, and tell me that you pronounce it the same way as “cocoa powder.” Just because he does awesome things like saves lives and gets A’s in organic chemistry, and I make paleo cookies for a living, does NOT mean that I do not know THINGS. 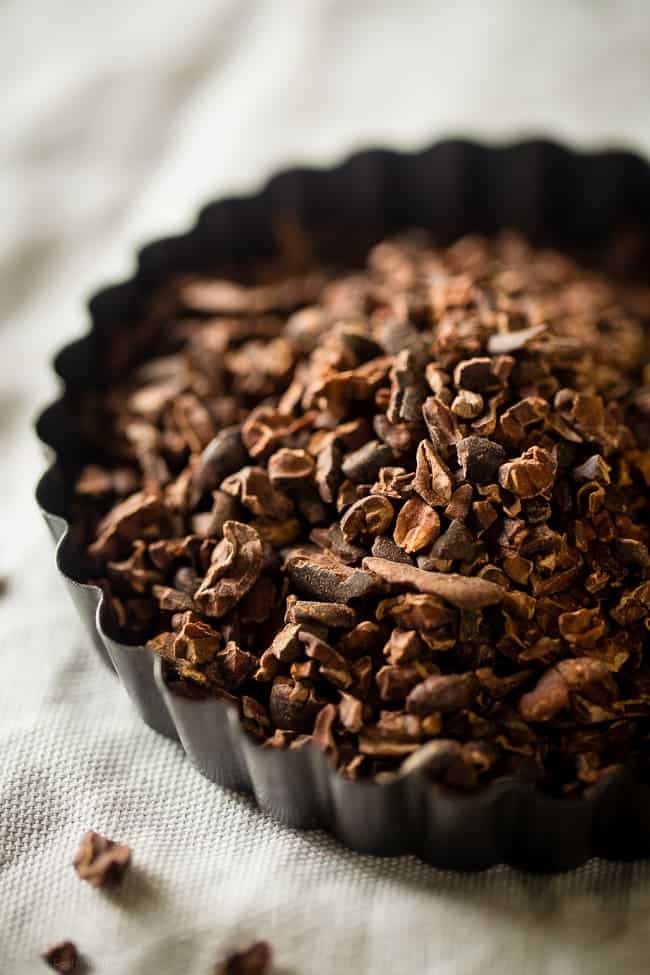 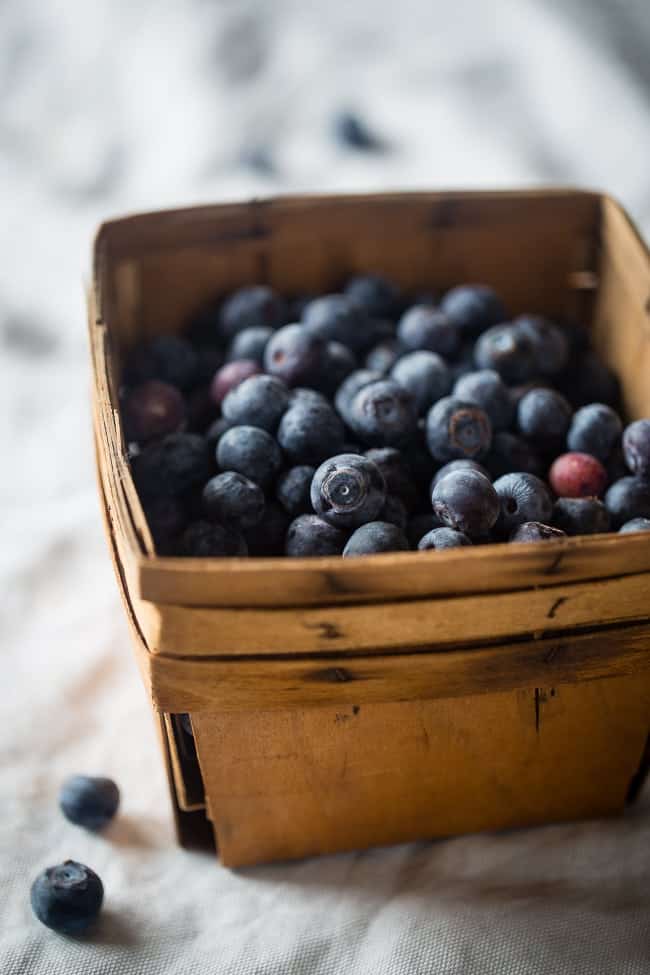 Sorry. Had to vent.

So cacao nibs. This quinoa salad recipe is their PRIMERO appearance in a recipe on FFF and I am basically sort of in <3 <3 <3 with the way their crunchy little selves burst with deep, daaaark, chocolate-y richness in every single bite of this salad. Or, really anything that would taste good with a little pop of chocolatey goodness.

Which, is basically everything in life ever. Yew know.

My taste buds were first opened to these crispy little gems when I told ya about those superfood salads that I had been eating for lunch and dinner all week long. One of the salads was the very flavor combination that you see happen’ here: blueberries, quinoa, almonds and CACAO NIBS. It was the first salad that I tried. And the last salad that I want to eat before I DIE. 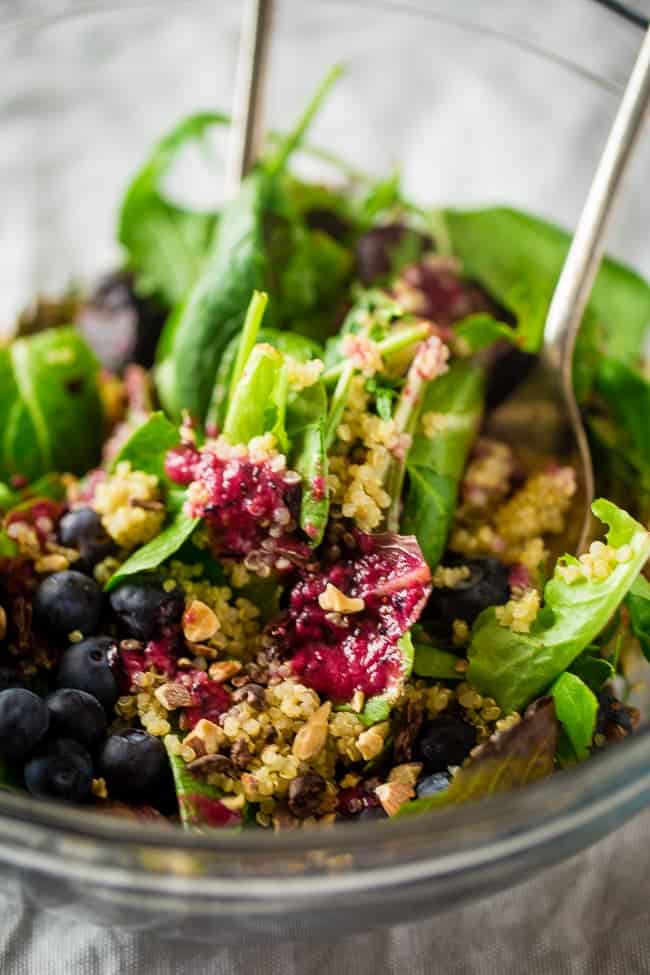 Crunchy superfood, slightly bitter cacoa nibs + juicy, sweet blueberries + chewy quinoa = taste sensation in my mouth that I would like to keep happening over and over and over again, until I no longer have the strength to move my fork to my face. Seriously it makes the best quinoa salad recipe!

Truthfully, at that point in my life, I will probably just switch over to salad face-planting. NO GIVING UP.

It was the kinda tasty-bowl-of-health that needed to be recreated and scooted into your faces’ vicinity so that you could also become one with the magic of zippy arugula tossed with creamy, fruity blueberry vinaigrette and that chocolate crunch that makes your taste buds say “OH HELLO NUTRITIOUS SUPERFOOD  QUINOA SALAD RECIPE, I THINK I WOULD LIKE TO KEEP THIS RELATIONSHIP GOING ALL WEEK LONG.” 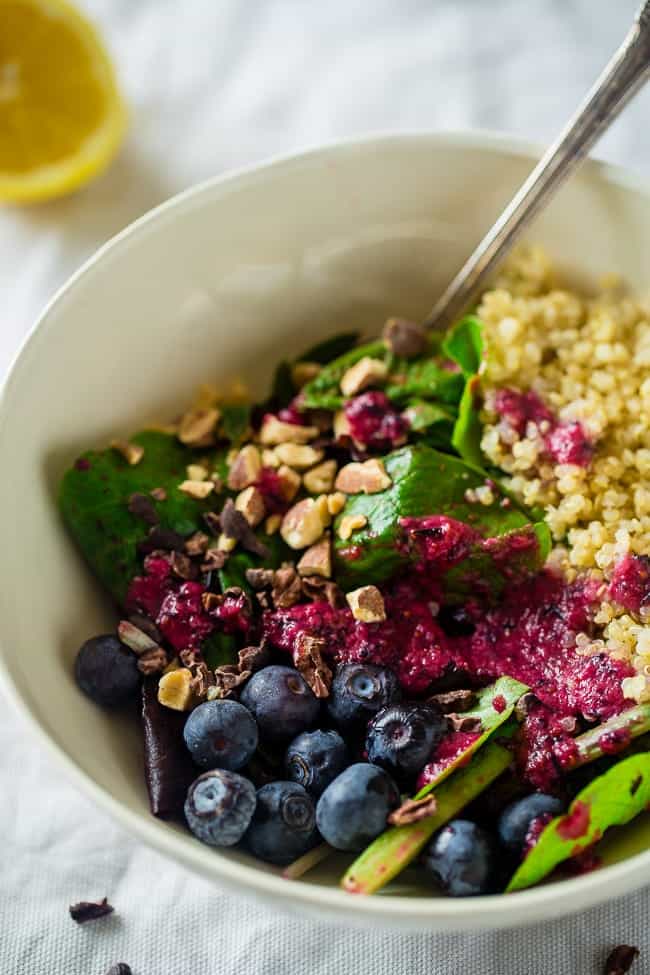 Or something to that effect.

The vinaigrette is mix-er-oo of zesty lemon juice, pulverized fresh blueberries, and sweet agave that blends together to create a perfectly-tangy-sweet vinaigrette that hugs each individual, wholesome grain of quinoa. BUT, be warned peeps, the dressing does thicken up a lot as it sits as it’s made with fresh fruit (think fruity jams.) SO, to avoid award salad situations, make it JUST before you plan to serve the salad, you dig?

Aside from vinaigrette-making-instructions, there isn’t a whole lot of other aspects of this quinoa salad recipe that could really go wrong for you. 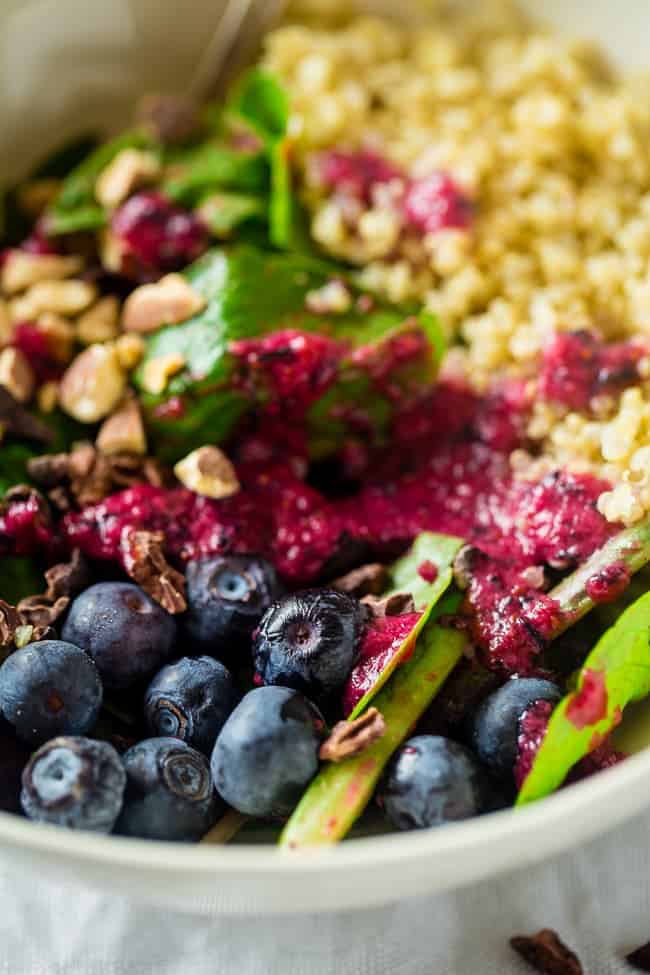 It’s sort of a foolproof bowl of antioxidants that can really only make you pat yourself on the back for being a super-awesome person who just made super-awesome healthy AND tasty life choices. 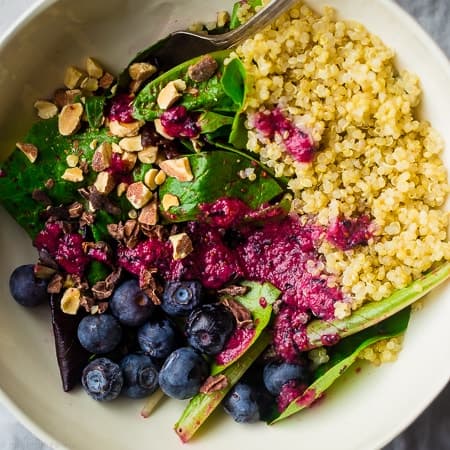 *I buy my nuts pre-toasted, but you can toast them in a 400 degree oven until lightly golden brown. This only takes a few minutes, so watch them closely.
**While the dressing stands, it sometimes thickens a lot. If this happens, whisk it really well before adding to the salad. Once whisked, it should stay quite smooth
***Salad is best served immediately as it does dry out if your refrigerate it, due to the fruit in the dressing.

Course:Main Course, Salad
Cuisine:American
Share your creationsTag @foodfaithfit and hashtag it #foodfaithfitness so I can see what you made!
Rate It 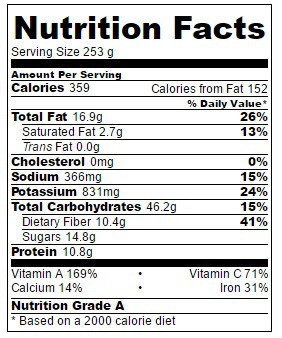 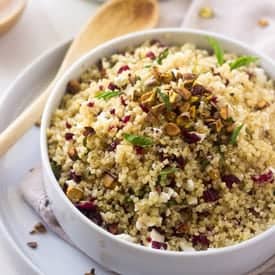 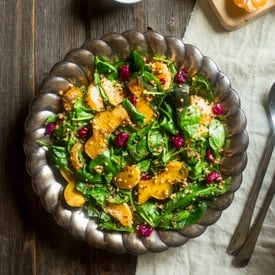 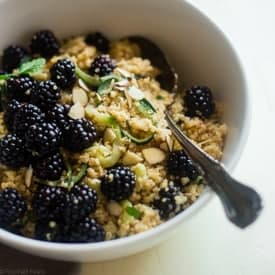 Vegan quinoa salads from around the web: 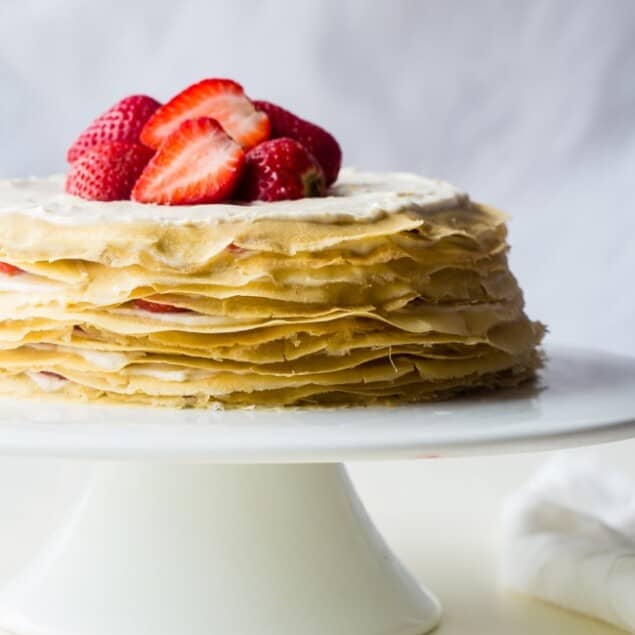 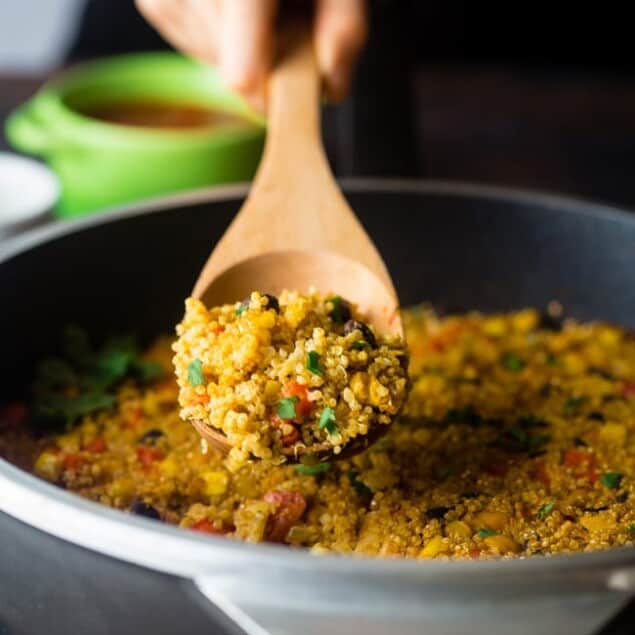