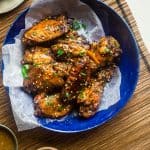 *This recipe does make a fair amount of sauce, and you most likely won't use it all. However, I think chicken wings need lots of sauce, so it's better to err on the side of having a little too much than not enough!