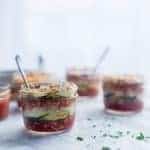 *Use your thinnest zoodles first, to make sure they don't take up too much space, and you can't fit all the layers in!

**You can store the jars in the refrigerator and then microwave as needed!