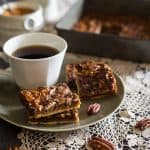 Note that you need to let the finished bars chill at LEAST 6 hours before serving!

* Make sure the crust is nice and golden. You want it be really firm, or the topping will cause it to go soggy.
**Make sure you give these bars the full amount of time to chill, as this is what hardens the crust. And serve these bars cold, not at room temperature or warmed up.
**Since the topping is so sticky, it's a lot easier to slice these if you a run a sharp knife around the outsides of the pan first, before slicing into bars!