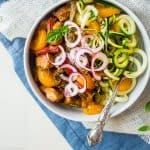 * if you leave the honey off for the Whole30 option, you may need to squeeze a little more fresh orange juice over the stir fry/zucchini noodles once it's plated, if you want a little more sweetness.