END_OF_DOCUMENT_TOKEN_TO_BE_REPLACED

Start your day off with this protein oatmeal that tastes just like a healthy cinnamon roll! It’s SO quick, easy, healthy and will keep you full until lunch! 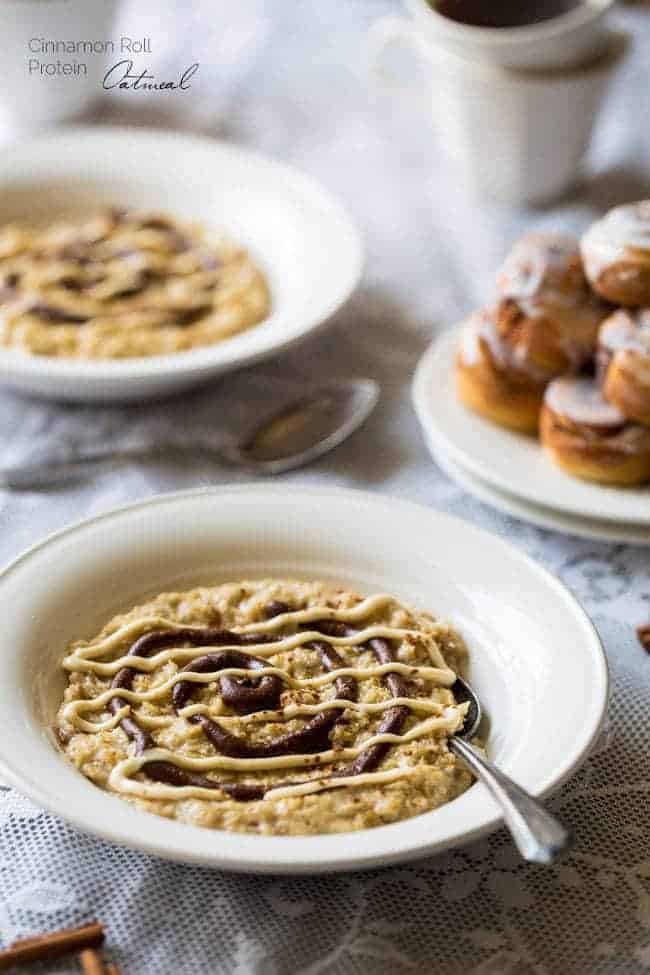 Friends, have you ever wondered how do you make protein porridge?

Or maybe how to use protein powder at breakfast time that isn’t a smoothie?

Well, Let me introduce you to one of my most favorite recipes that I ever created in the 1.5 years that FFF has had it’s own little space in the interwebz.

And yes. It’s a bowl of oatmeal. WITH PROTEIN.

I know you’re thinking “but what about that Crepe Cake? Or Paleo Chocolate Chip Cookies? OR Vegan Brownies Stuffed with Peanut Butter Cookie Dough? How are those decadent desserts not your most favorite ever?”

Well, I adore those too. Butcha don’t eat those everyday.

But maybe we should change that? Why DON’T we put vegan brownies into our faces every day that we wake up and feel ALIVE? Things to start asking ourselves.

However, my real life self has actually been doing that with this bowl of healthy cinnamon roll protein oatmeal. Sometimes it’s even in the form of gluten free cinnamon roll overnight oats.

That just so happens to be ready in 5 minutes. And you don’t have to make an actual homemade cinnamon rolls recipe and mess with yeast. Which means you don’t need to keep checking on your dough every 34.6 seconds to see if it’s risen enough so that you can bake it and FACE PLANT into all things sweet, gooey and full of cinnamon perfection.

Don’t lie. I know I am not  the only one who does it when I make cinnamon rolls.

Patience. I have NONE.

The “oatmeal” part of this protein oatmeal recipe is nothing fancy. I mean it’s oatmeal. You can practically get it for free (hello Bulk Food stores!) and you just mix it with water, sweetener of choice and give it a little one to one time with your stove top. Or you could be trendy and make instant pot steel cut oats!

Look at you making a protein oatmeal recipe. You’re BASICALLY the Martha Stewart of breakfast.

NOW comes onto the best part.

And by “best” I mean tastes-like-the-inside-of-a-cinnamon-roll kinda best.

However, control the urge. You want ALL of that to get up IN the bowl. Nowhere else, capeesh?

So. The swirl. I had this random idea to try to mix vanilla protein powder with just the TEENIEST ever bit of water, to see if it would get super thick and take the place of butter for the filling. 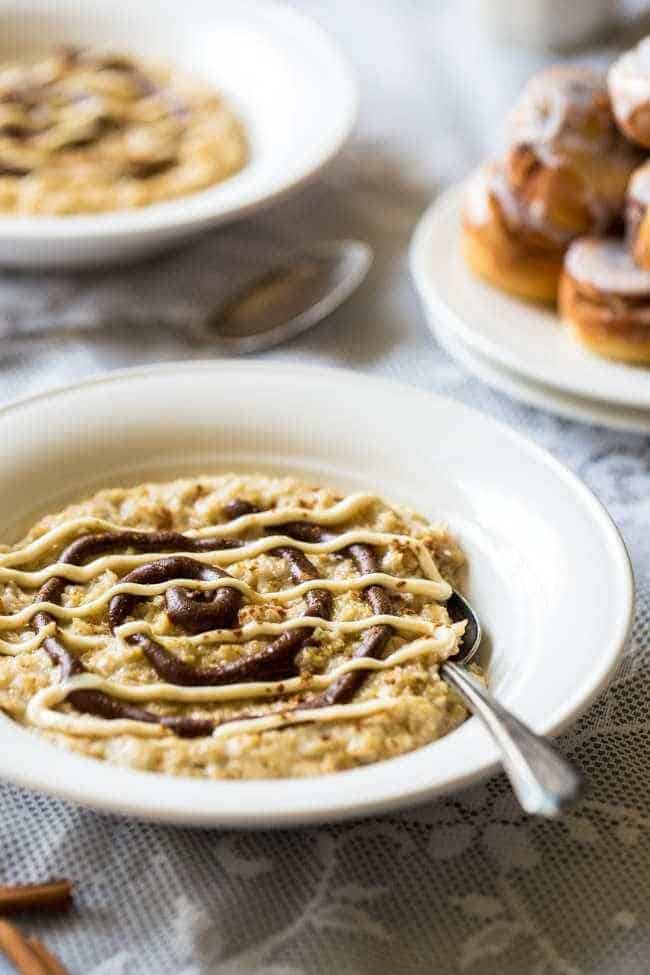 I took a little nibble and the tiny little bowl of thick, brown goo (yeah, I know, it doesn’t look the numiest) punched my taste buds STRAIGHT IN THEIR FACES.

I literally texted Mr. FFF and was like “Move over IHOP, there’s a new breakfast fav in town.”

If you’ve been around here long than about 2 days, you know that means some serious love-age went down.

I swirled it into my oatmeal. I took a bite. I didn’t think it could get much better…..UNTIL.

da Da DAAAAAAAAAAA <– notice how the capitals grow as the intensity of the sentence grows? 🙂 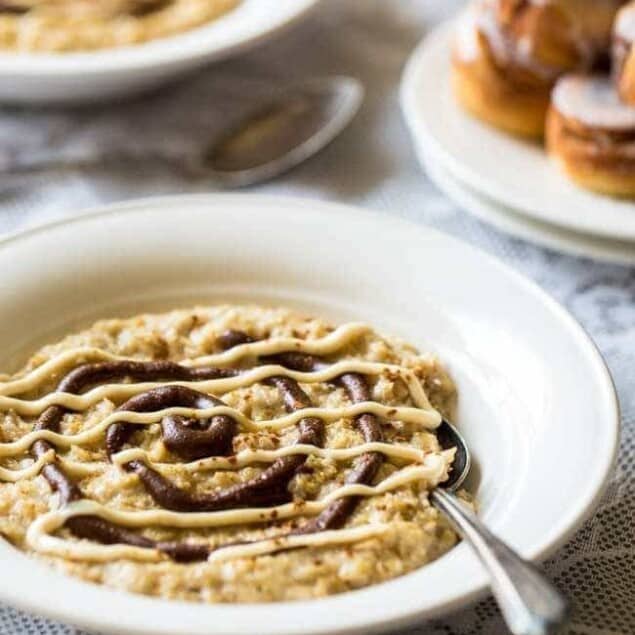 *Brown sugar can be subbed if you do not coconut sugar. However, some people find brown sugar slightly sweeter than coconut sugar, so you may want to use a little bit less to suit your taste. 🙂 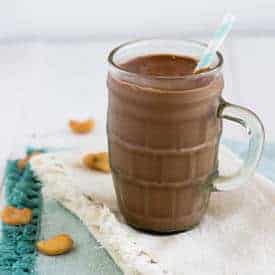 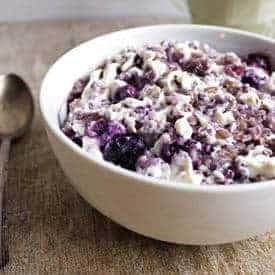 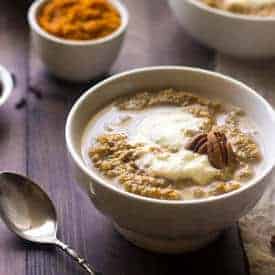 Protein Oatmeal from around the web: 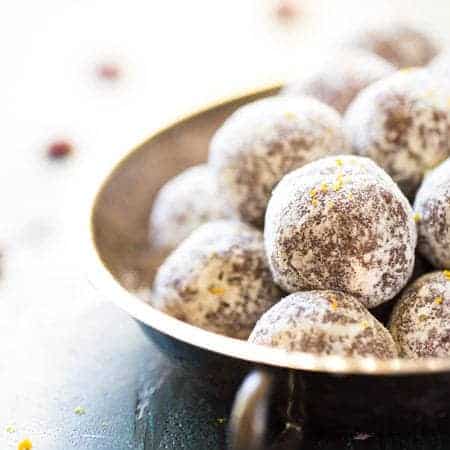 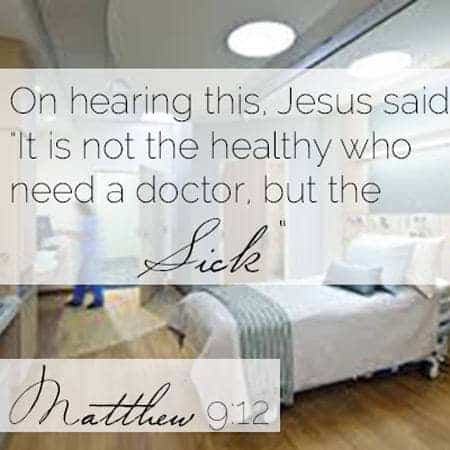